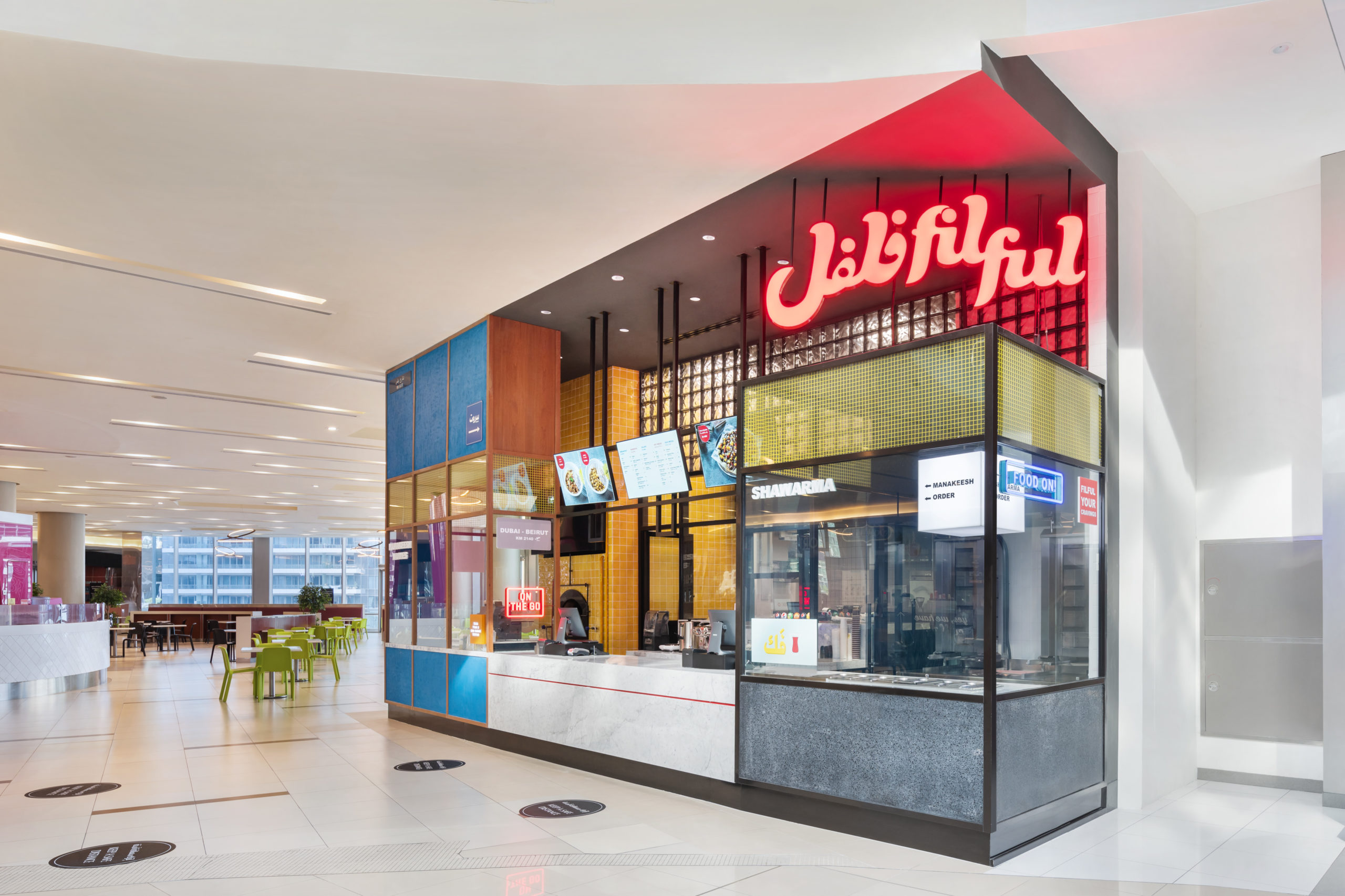 H2R Design has completed the interiors and exteriors of Filful, a Lebanese street food kiosk in Dubai Marina Mall. With a menu based on the bites that are enjoyed across Beirut’s streets, the 70 square meter kiosk houses a shawarma zone, an Arabic bakery oven, a section for drinks and a kitchen area, all visible for passer-by’s to see, smell, hear and develop cravings for.

The brief for this project included packing a variety of operational functions into a relatively compact space and at the same time, creating a vibrant and loud design, highlighting authentic food, illustrating Beirut’s vibrant street food scene. An area adjacent to Filful’s side wall was also a canvas for creative ideas. 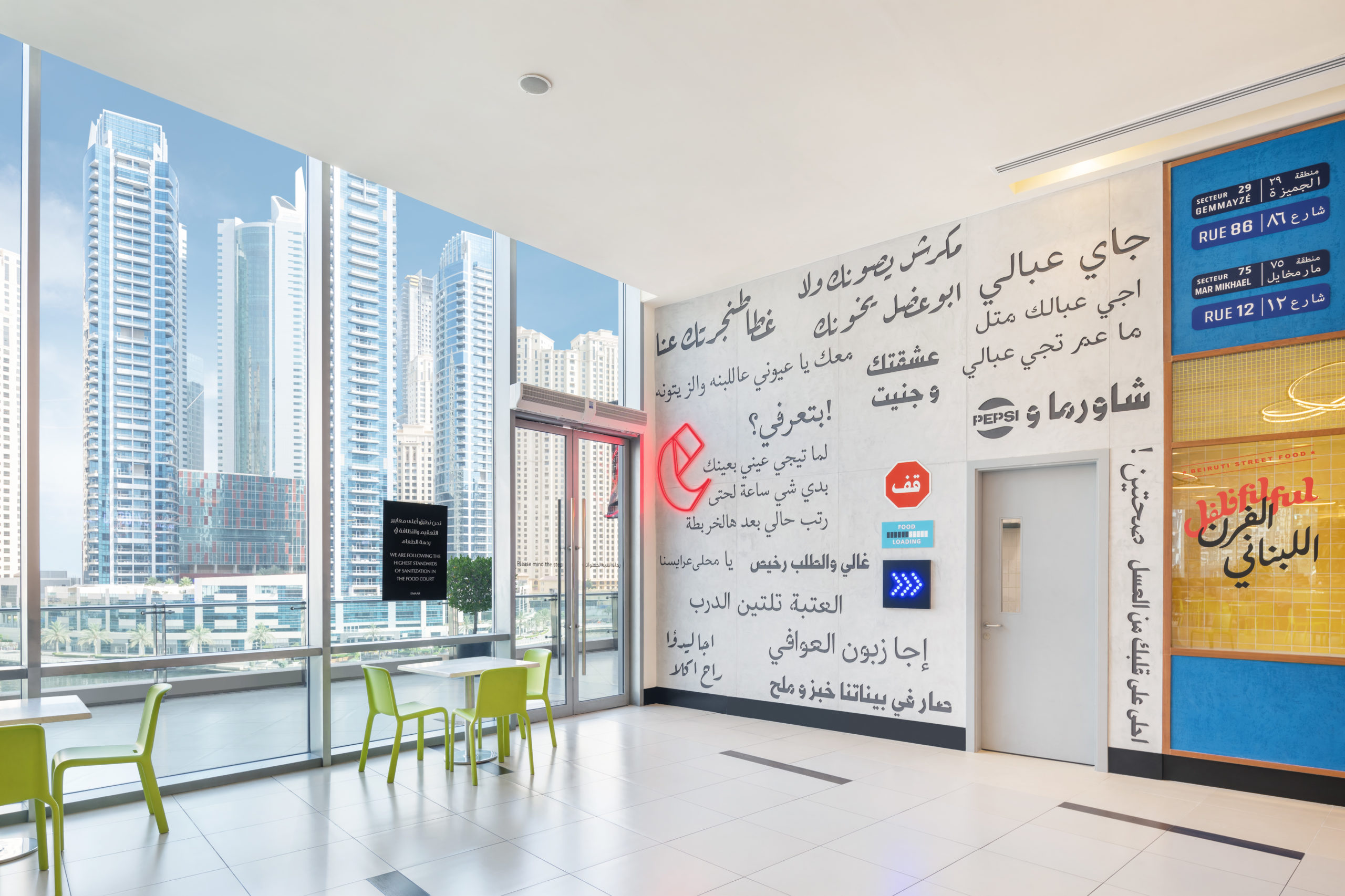 H2R Design took inspiration from Beirut’s famed Bliss Street, near universities where students flock to after a long day of classes or after a celebratory night out. Inspiration also came from the colourful boutiques lined one after another across the city, with different materials signs, pop-up graphics and graffiti.

Although Filful is located in a prime location, H2R Design knew that they had to create a design that drew attention to the F&B concept amidst the colourful cinema reels and a variety of illuminating stimulus near the escalators. Additionally, the aim was to create a design that captured the hungry shopper just as they ascend to the floor.

To achieve this, the overall design had to stand out with bright colours and pop art graphics positioning it as the only warm industrial structure in that zone. The design had to blend the existing brand’s colour palette with Beirut’s urban cityscape while showcasing delectable dishes and treats.

“This was a very special project for us because the design was implemented was per the original pitch. Very little was changed, which reflected how we hit the soul of the brand. Filful’s design is simple and honest with industrial connections keeping in with the charm of street shops. We were looking for elements that reflect an old city with a rich history, literature, and some eccentric pop culture. The design took on a lot of contrasts, such as being warm but industrial, new but timeless, and always evolving. The vibrancy of the lively city, despite its challenging past had to be translated into this funky concept. And we had to do all of that in a relatively small space,” Hasan and Husain Roomi, Founders of H2R Designs said. 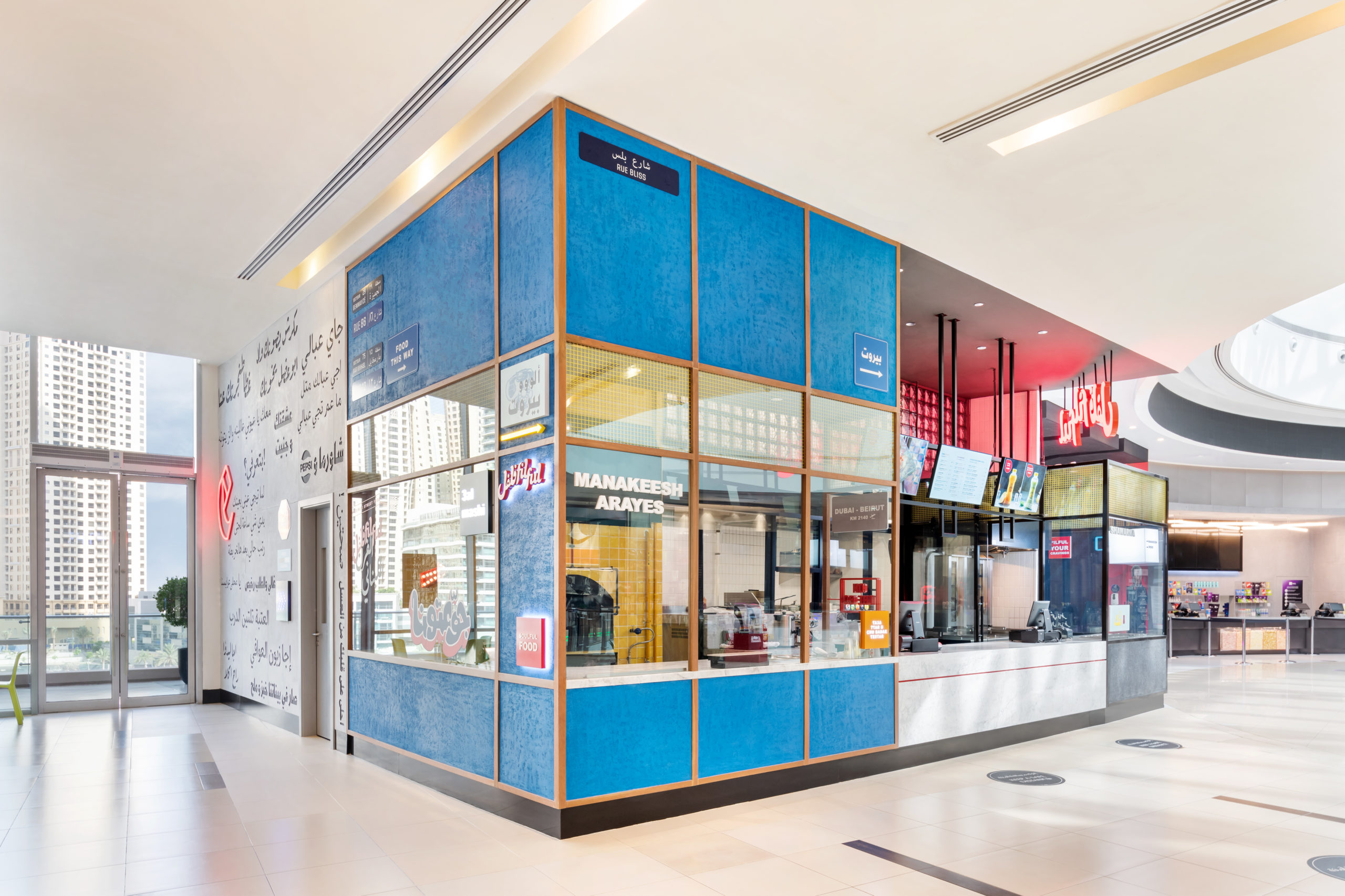 The design features that have an immediate effect are the textured rough paints, dark wooden tones, glass blocks and acrylics, the neon lighting and signages. Other eye-catching features include the relief slogan side wall, the Arabic oven preparation area with flashy yellow tiles, the blue textured painted panels and the black shawarma enclosure section. There was also the use of contrasting materials reflecting the concept of merging the old and new such as black metal, terrazzo, and coloured acrylics versus the rough textured paints, dark wooden framing and smooth white marble.

The overall unit configuration is a play of volumes and translucency to ensure that the dining concept is not overlooked when walking in the area. The result of Filful’s design is a harmonious combination of styles and materials where the diversifications of art, slogans and signs coalesce into a total transition from a mall dining experience to a street food corner.