“It was all very open and dreamy,” says Basel Uraiqat. “We wanted to start a multidisciplinary practice that wasn’t just about architecture, or just about interior design. It was – for us – going to be about the process of creating things.”

Uraiqat Architects, now an architect and design boutique firm in central Amman, started off as none other than a “cliché basement-office”, asserts Basel, who co-founded the company with his wife, Basma, in 2009. The two had just returned to Jordan upon completing their postgraduate studies in the UK and hoped to contribute to the capital’s growing design scene.

He adds: “When we started, it was a struggle for us – trying to be minimal. But now people are adapting and they’re following more contemporary trends.” 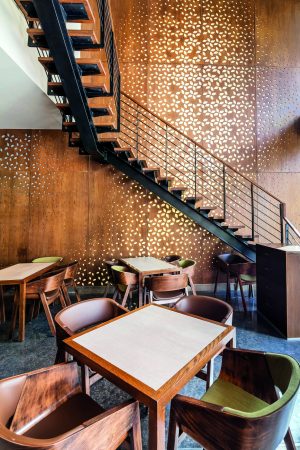 At first, Basel and Basma worked under the studio name Atelier Uraiqat, which still exists today but functions as Uraiqat Architects’ multidisciplinary arm. From wall objects to sculptures and installations, the atelier’s function seems, at the very least, to keep the team from falling into a creative rut. It allows them to research, experiment and explore, with the artworks often exhibited in galleries and design shows. Uraiqat Architects, on the other hand, is a steadily expanding business that was spun off in 2012, and has been turning out project after project in Jordan and across the Middle East ever since. In the space of just five years, the firm has delivered more than 30 projects (no small feat for a team that until recently numbered just five), with each one more powerfully cohesive than the last. “We don’t specialise in a certain type of project,” says Basma, “but we specialise in a certain typology that involves many innovations.

We focus on projects that require different approaches.” And, true to her word, Uraiqat Architects’ growing portfolio currently includes a wide variety of building types, from office spaces to mosques, residences to cultural centres.

We like concrete, stone, wood – materials that are natural

“We’re currently working on a couple of innovation centres, too,” she adds. “Really, they’re just spaces where you have a lot of people working together producing prototypes. They’re like technology incubators, so we have a couple of these, which we like working on because they involve a lot of innovation in terms of the design of the space. It’s design for creative people, which is a big challenge that we love.”


And while Uraiqat Architects never reproduces the same design, there is an element of continuity between its projects – perhaps in the team’s approach to space and their ability to apply the sixth design sense: light. From cafés to shops, each design allows the space to have its own experience, while remaining breathable. Forms appear geometric yet sinuous, and opposing sides of a room are joined together with fluidity. Uraiqat Architects’ work is, simultaneously, overwhelming and absorbing..
“The things we always look at are light and material,” says Basma. “We like concrete, stone wood… materials that are natural. And actually,all of our work in the atelier is based on light.Whatever pattern we use or sculpture we do,in the end, it’s about howlight reacts to it. And that’s a guiding principle in our work.” 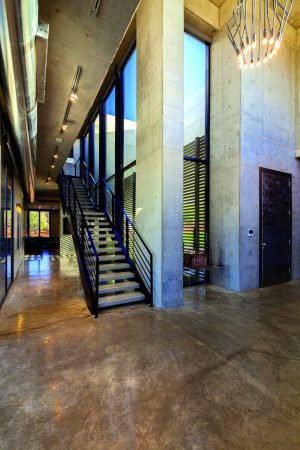 A busy year ahead
With lots of projects coming in, Basma and Basel have decided to expand their office for a second time (the first time was in 2012, when they took on additional staff and moved into a new space). This time, though, they’re inching closer to their dream office (an old Amman warehouse) and have chosen a place on Mecca Street, near the market where the team collects materials for projects. “It’s a step forward, not the final destination,” says Basel. Basma adds: “We’re really focusing on designing our company this year. We’re looking to expand and find some really, really talented people and create a system that allows us to take whatever work we’ve done so far to the next level in terms of volume and quality.”

Although the team now consists of 10 people, Basma and Basel are looking to grow considerably this year, and their new space allows for such development.

For both, the future feels like a blank canvas – despite their many years of experience. Going from Atelier Uraiqat to Uraiqat Architects seemed almost like a graduation, and the graduates are now regrouping, and looking at how they want to work without losing their founding principles. Maintaining a general methodology that adapts for each project’s requirements, the architectural practice is nothing if not serious about staying true to its atelier roots. The yin and the yang are at constant play, pushing them to grow while pulling them back from the corporate edge.

“It’s now more about building an innovative machine that creates architecture and interiors,” says Basel. “At the beginning it was more personal and it was more of a project. And now it’s a company and we have to look at all these aspects, not just the design.

We have to realise our ideas without losing the spirit of innovation.” In addition to the centres the team is working on, Uraiqat Architects takes on a couple of residential projects each year and 2017 will be no different. According to Basma, they’re very specific about the type of work they accept and often look for the ones that allow them room for play. “There are things we always say, like ‘never take anything for granted’. We have to question things every day, from the process to the method to even the rules of architecture and design,” says Basma. “We focus on the ability to grow, which is very important. If you’re unable to change and grow and [become] better, you’ll eventually fall behind – and this guides us at the office.”

Students get a chance to shine at Salone del Mobile