Patterns of life: Designing with nature 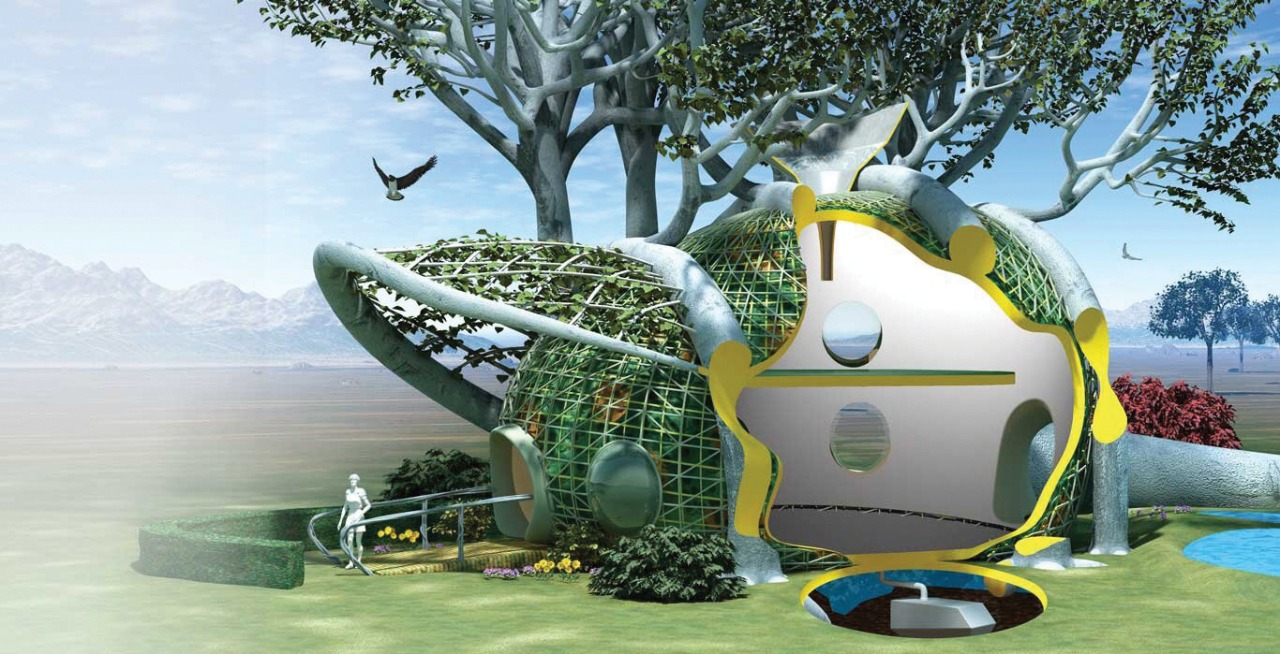 Biomimicry- or biomimetics- is an applied science that derives sustainable solutions for human challenges by observing and replicating biological design strategies and patterns for clean, efficient technologies.

The earth’s biological materials and the processes through which they’re generated are the results of successive improvement through natural selection. By emulating life, biomimicry favours choices tested by nature for the past 3.8 billion years: what we see around us today is the key to survival.

Architects have long been inspired by nature, and early signs of biomimetic architecture can be found in the work of Renaissance architect Filippo Brunelleschi. After studying the strength of eggshells, Brunelleschi designed a thinner, lighter dome for his cathedral in Florence, completed in 1436. In 1883, Antoni Gaudí transcended mainstream modernism and opted for an organic style- after taking over the design of the Sagrada Família, the world-renowned Catalan architect got rid of all straight angles and designed his masterpiece to represent nature, in which bone-like columns twist their way to the ceiling, branching out from ellipsoid knots and reaching upwards, defying common construction practices and carrying on the character of a living organism. Casa Batlló, Gaudí’s second masterpiece, has a similar organic quality with more visceral and skeletal attributes, which is why it is also known as Casa dels Ossos, i.e. House of Bones.

Beyond shape, human bones make for great architectural models, as they’re made from a composite, a 50-50 combination of calcium and collagen. In an interview with the American Society of Landscape Architecture, scientist and author Janine Benyus, co-founder of the Biomimicry Institute, explains how research in bone structure led to a software programme that lightweight structures. “One of the major optimising technologies for buildings right now is a software called OptiStruct, which is based on a bone algorithm,” she said. “The technology mimics how bones lay down material where it’s needed along lines of stress, and take the material away from where it’s not needed. These bone algorithms are now seen in bridge and building beams, and they were used to lightweight Airbus’ new rib and wing assembly by 40%.”

Benyus, who popularised the field in her 1997 book Biomimicry: Innovation Inspired by Nature, suggests looking to nature as a “model, measure, and mentor,” and emphasises sustainability as the main purpose of this cross-disciplinary approach. With new technologies available to help recreate complex structures found in nature, biomimicry applies today to several aspects of the architectural and engineering field, and can be seen at three levels: the organism, its behaviour, and the ecosystem. Here are few notable examples of architectural construction fully generated by algorithms based on the biomimetic approach:

The Eastgate Centre in Harare, Zimbabwe, uses a passive energy-efficient mechanism of climate control by employing a temperature regulation approach inspired by the self-cooling mounds of African termites. The termites create a system of adjustable convection currents in which air is sucked in at the bottom of the mound, and then is vented up to the top through various channels in the mud. The ventilation system of Eastgate Centre functions in a similar way: outside air that is drawn in is either warmed or cooled by the building mass depending on which is hotter: the building concrete, or the air. It is then vented into the building before exiting via openings at the top. 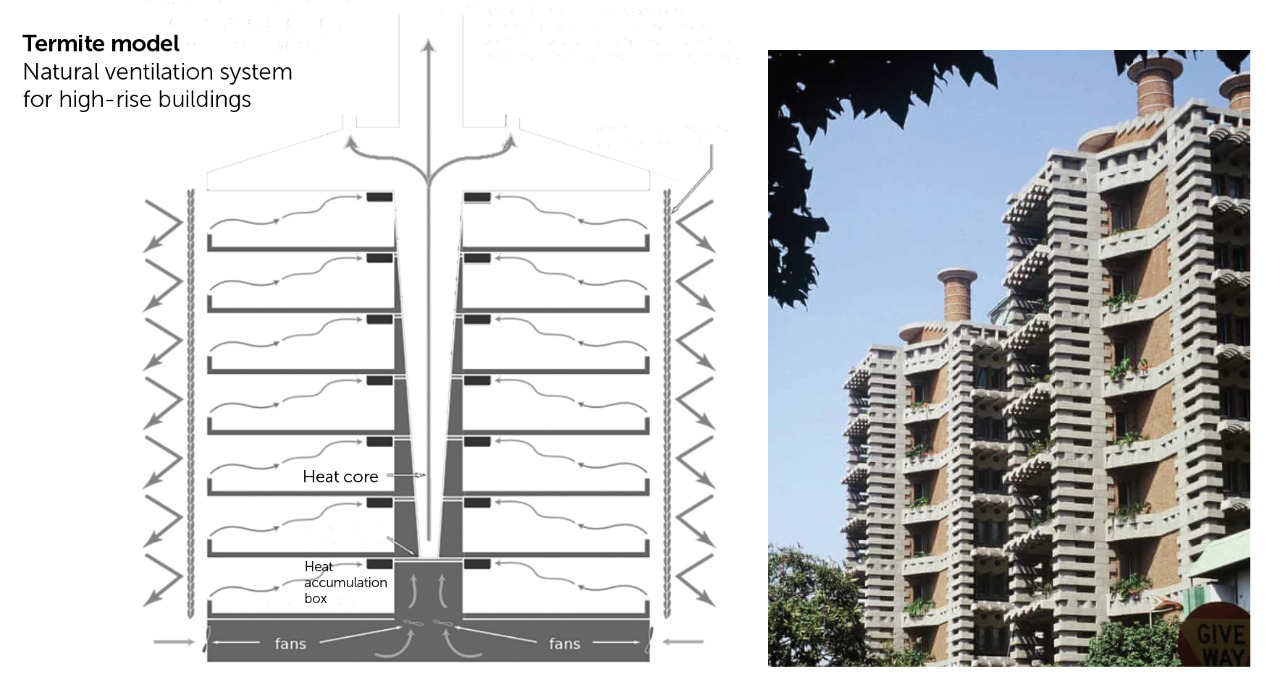 Oceans absorb vast amounts of carbon dioxide from the atmosphere, some of which is then extracted and turned into solid calcium carbonate by coral reefs and marine microorganisms called coccolithophores to create their exoskeleton. After studying how coral reefs are formed, scientists developed a way to form calcium carbonate by capturing the carbon dioxide and dissolving it in seawater.

In architecture, biomimicry is often used to seek sustainable measures by understanding the principles governing the form, rather than replicating the mere form itself. According to Michael Pawlyn, author of Biomimicry in Architecture and founding principal at London-based Exploration Architecture, biology would “solve the problem of climate change by making a lot more stuff out of atmospheric carbon.”

Atmospheric recyclable carbon materials could very well be used for construction to help tackle pressing environmental issues. The Biorock Pavilion, Exploration Architecture’s most ambitious project to date, plans to do just that: grow a building from minerals through electro-deposition of minerals in seawater- using the BioRock technology developed by Wolf Hilbertz and Tom Goreau.

In an interview with the Biomimicry Institute, Pawlyn explains how BioRock allows for “greater control of the forms that you can create. It’s a way of growing structures in seawater using electrodeposition of minerals. It’s mainly calcium carbonate and magnesium hydroxide. And it’s simple– you put a steel frame in the seawater, you pass a very low-level electric current through it, perfectly safe for wildlife, and you get fairly rapid deposition of minerals on that steel frame. After about a year, it can be 20-25mm thick, and it can be as strong as reinforced concrete. So, we’ve proposed growing a whole building that way.”

Another highly ambitious undertaking by Exploration Architecture is the Sahara Forest Project, which sets out to create new architectural spaces in harmony with the desert, by combining salt water-cooled greenhouses (inspired by the Namibian fog-basking beetle) with solar power energy and desert revegetation technologies.

In 2012, the firm managed the construction of the first built version of the project: a one-hectare pilot facility in Qatar including a parabolic trough concentrating solar power (CSP) collector and a photovoltaic array. The next stage is proposed as a 20-hectare test and demonstration centre, with the greenhouses having achieved productivity levels equal to commercial greenhouses in Europe, with half the amount of fresh water of conventional approaches. A facility with 60 hectares could provide all the cucumbers, tomatoes, peppers and aubergines currently imported into Qatar.

BACK TO BASICS
The golden ratio
/ ORGANISM LEVEL /

The idea of mimicking nature in man-made inventions is not new.
One of the most recognisable structures on earth, the Aldar headquarters in Abu Dhabi, is the world’s first circular skyscraper. It relies on a diagrid to transfer the weight of to its foundation. The key challenge in bringing the massive circular concept to life was to find the two points where the building should pose on the ground– and for that, the development of the volume began by using one of the oldest rules in architecture: the rule of proportion based on the golden ratio, or phi (Φ).

Known also as the Fibonacci sequence, this ratio has been used by mankind for centuries in architecture: from the Pyramids of Giza to the Parthenon in Greece, architects leveraged phi to create balance between structural elements.

To apply the golden section ratio to the circular façade of the Aldar headquarters, the circle was divided into a pentagram, which then had Leonardo Da Vinci’s Vitruvian Man juxtaposed on it, with the head and four limbs at the five points of the geometric shape. Accordingly, the architects were able to locate the two points of stability thus creating the perfect balance.

Developed by Marwan Zgheib and his Lebanon-based firm MZ Architects, the circular skyscraper, voted as the Best Futuristic Design of 2008, has also been inspired by the shape of a clamshell. Using grids of steel shaped in a diamond framework to create a curved glass skin, the building was completed in 2010.

Adaptability in nature is the ability of organisms to cope with the changing climatic variables such as temperature and humidity. In adaptive architecture, parts of the structure manipulatively change and transform at certain times of the day to manage the variation of climate.

The galanthus nivalis flower, also called snowdrop, has special mechanisms of cooling. Physiological and morphological attributes of the petals have been mimicked to design retro-reflective building facades. This is the principle that Aedas Architects used to design a double façade system for Al Bahar Towers in Abu Dhabi to avoid the blazing sun of the UAE desert. The exterior facade is kinetically designed to open and close in response to the movement of the sun, dropping solar gain by up to 50%. The folding motion of the facade system panels is inspired by the adaptive snowdrop flower, as well as the mashrabiyas as a shading screen.

Terreform ONE brings a fairy tale perspective to the concept of sustainability: for Fab Tree Hab, three MIT designers, Mitchell Joachim, Lara Greden, and Javier Arbona, came up with a radical concept of creating a home from a tree, and the trio have found ways to create a symbiotic relationship between the house and the surrounding environment.

“Pleaching,” a gardening technique in which tree branches are woven together to form living archways, has been used to build the arboreal frame. Trees such as elm and oak bear the heavier loads, while vines, branches, and plants shape a lattice for the walls and roof of the house. The interior walls, consisting of packed straw covered by a smoothed layer of clay, create a moisture barrier from the outside.

But the house’s idea of sustainability goes beyond just the structure- a gravitational eco-plumbing system collects and distributes rainwater throughout the home. Wastewater would be purified in an outdoor pond with bacteria, fish, and plants that consume organic waste- and the trees that form the frame and the plants that grow on the external walls are meant to provide sustenance for the inhabitants and other living creatures who interact with the structure.

Buildings account for 25-40% of the world’s total carbon emissions, and this number is expected to rise dramatically in the next decade. So, in a way, this childhood dream turned into a living treehouse could be a path to true sustainability, after all.