When Meraas delivers Bluewaters Island in the first half of next year, it will raise the bar for other developers in Dubai, a city hardly short on big ideas. The man-made island, situated just 500 metres off the coast of Jumeirah Beach Residence (JBR) will combine residential, hospitality, retail and entertainment components under the shadow of what is certain to become a world famous landmark. The world’s tallest observation wheel is steadily beginning to take shape while construction continues around it. At 210 metres tall, Ain Dubai (Dubai Eye in Arabic) will dwarf the iconic London Eye (135m) and snatch the world record from the 167m High Roller in Las Vegas by some considerable distance.

Bluewaters Island is the logical next step for a developer that thinks differently to others. The projects it has successfully concluded to date -The Beach at JBR, Citywalk, Boxpark, Last Exit and Dubai Parks and Resorts– have each introduced a completely new concept to a city previously better known for shopping malls and skyscrapers. The government-controlled company is quite literally on a mission to change the face of Dubai.

Take The Beach at JBR for example. Adding a pedestrian retail project in JBR seemed to fly in the face of conventional wisdom: that people in Dubai prefer to drive their cars to an air-conditioned mall. But the project has proven to be a huge hit with tourists and residents alike, invigorating the area and lifting the value of all property around it. Bluewaters is planned to be an extension of that project while taking it to the next level. 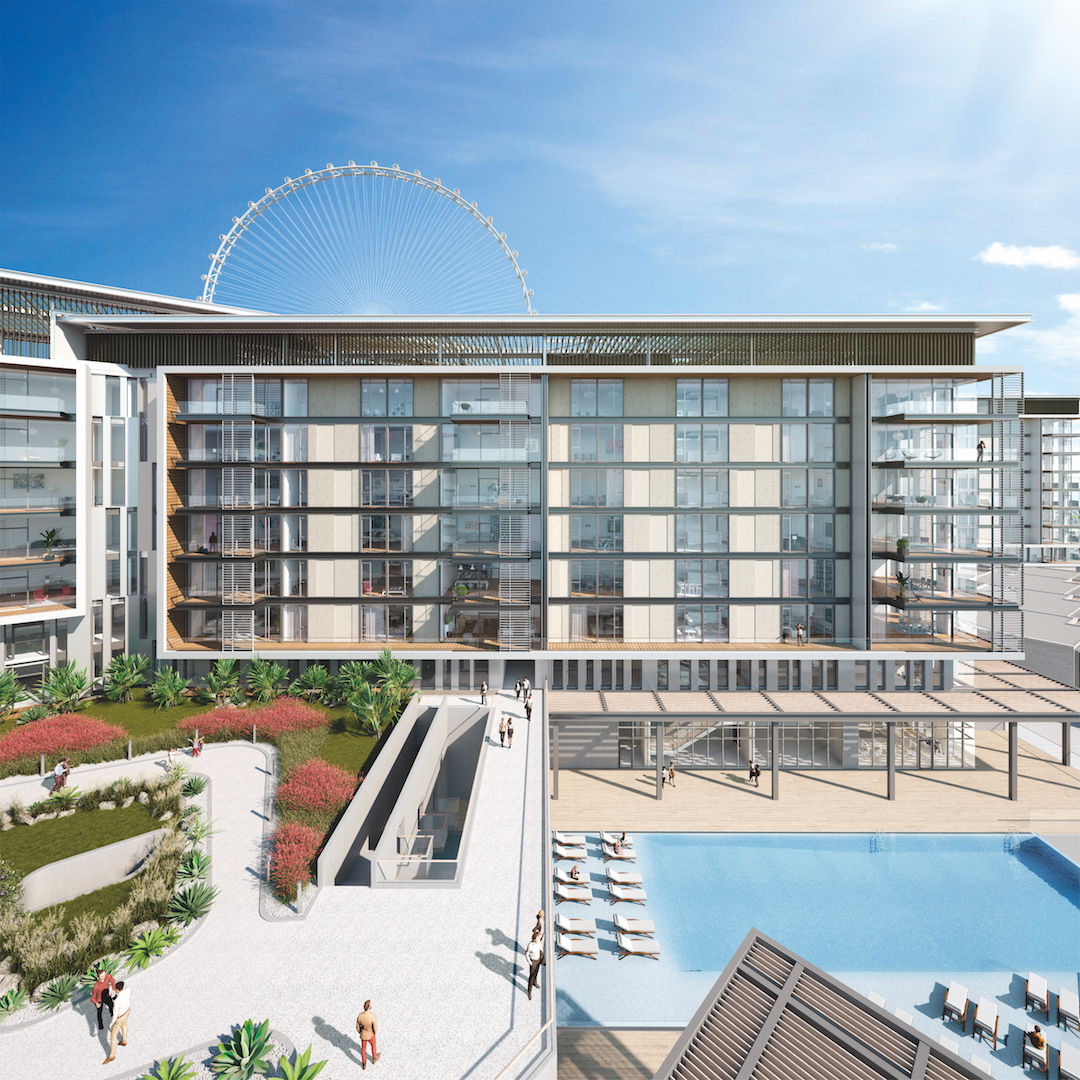 “Meraas doesn’t see itself as a traditional developer,” says Michelle Seywood, Vice President of Design at Meraas. “We’re here to deliver a legacy for this city. We’re here to deliver great places and great experiences for the people who live in Dubai and the people that visit Dubai. We want people to leave with fantastic memories of what Dubai has to offer.”

She adds: “Fundamental to our brand is this active urban life. We want people to participate in our developments. Putting people at the forefront is what sets us apart. His Highness Sheikh Mohammed, when we opened Citywalk, gathered all of the other developers to Citywalk to tell them ‘this is the benchmark for Dubai.’”

What Meraas developments have in common is that they are destinations, magnets for people that live in the city as well as those that come here to play. The company says it already attracts over 140 million people per year to its projects. At the heart of the firm’s ethos is a set of standing principles, says Seywood who has worked at Meraas for almost all its nine years of existence.

“We are a government developer. We’re not just about building buildings but about creating places and experiences, a community for people to live in and a lasting legacy, a catalyst to change the city and drive transformation in the whole landscape of the city of Dubai.”

Sure enough the developments have already begun to affect how others are doing things. The most obvious impact has been on the areas in the immediate vicinity of its projects.

“When we opened Citywalk, all the other developers started following us and knocking out the blank walls of their developments, opening the streets up, and making them active with food and beverage and retail.”

Meraas is doing all of this with a view to what Seywood terms “creating addresses”, distinctive neighbourhoods as much as you would find in world class cities such as New York, London or Hong Kong.

“Meraas doesn’t see itslef as a traditional developer. We’re here to deliver a legacy for this city” – Michelle Seywood, Meraas

“You go to London and you’ll remember key addresses within that city and that’s what we aim to do in Dubai,” Seywood says. “At Bluewaters, you’ll see architecture that you’ve not seen in Dubai before. Everything is carefully crafted – from the architecture, the urban planning, the mixture of uses and functions and tenants that we have in there – to create a new environment for Dubai.” 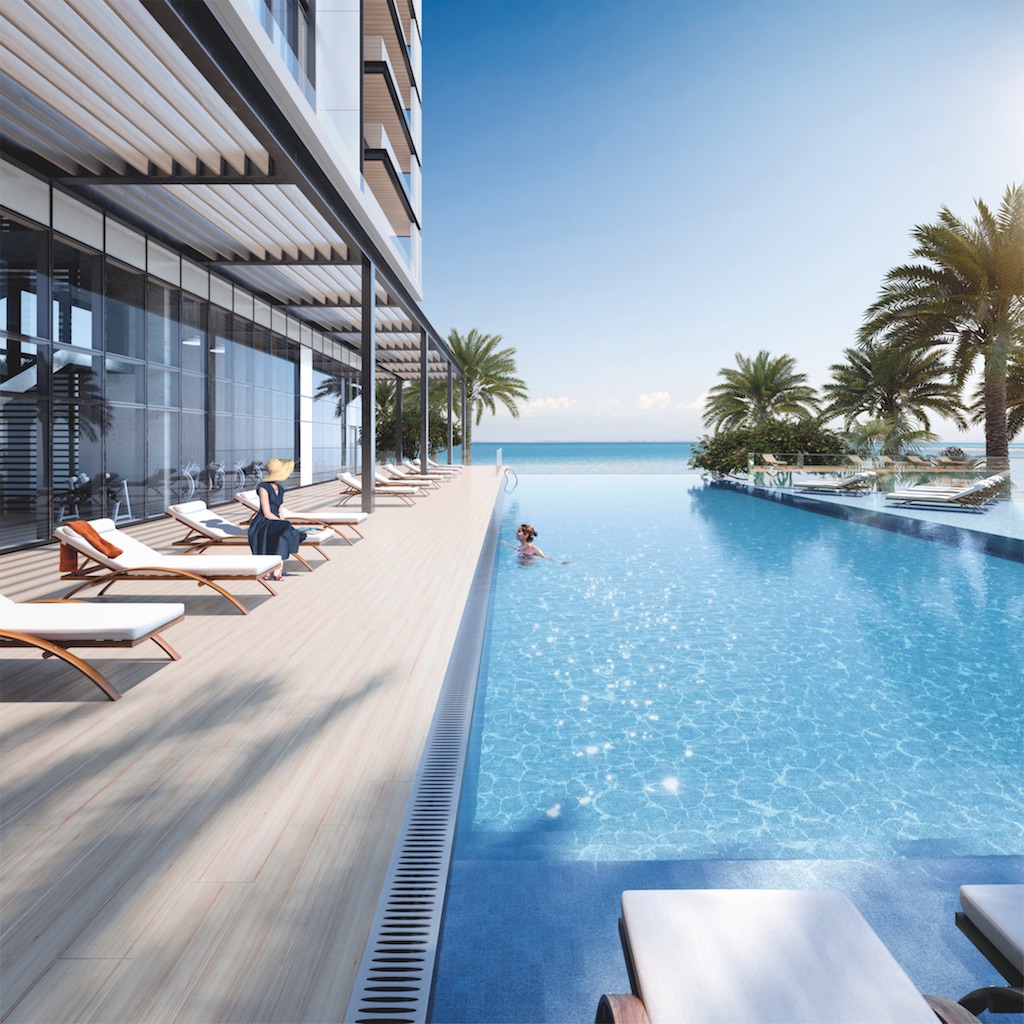 We paid a visit to Bluewaters Island late last month to get a close up of work in progress. The new bridge, built by Habtoor Leighton Group, had only been in place for around two weeks at the time and you could still see the parallel temporary causeway used daily by thousands of vehicles during the construction process which began in mid-2013. The island is served by its own dedicated link from Sheikh Zayed Road to ease passage in and out of the development.

Pedestrians will have their own direct access from The Beach via a bridge that is still under construction. However, visitors will also be able to access the island via a third, innovative mode of transport, which operates on a dedicated track along the middle of the road bridge. Provided by Dutch technology firm 2getthere, the system will feature 25 driverless Group Rapid Transit (GRT) vehicles capable of carrying 24 passengers each, connecting stations on the island with Nakheel Harbour and Tower Metro Station 2.5 km away. Early plans to build a cable car to take pedestrians to the island from The Beach were scrapped.

The pedestrian bridge and GRT will connect with a transport hub at the first building on the island, which is the retail wharf. Taxis and buses will also arrive there. Upon arrival on the island, almost all vehicles will go directly into a tunnel leading to a ‘basement’ area. Vehicles can directly access underground parking for each of the residential, retail or hospitality districts or emerge into open air at the far end of the island next to a conference centre and the hotel area. The tunnel goes under the main boulevard on the island that divides the residential area to the left hand side with the retail and entertainment district on the right. This will leave the boulevard relatively traffic free for residents and visitors to enjoy. 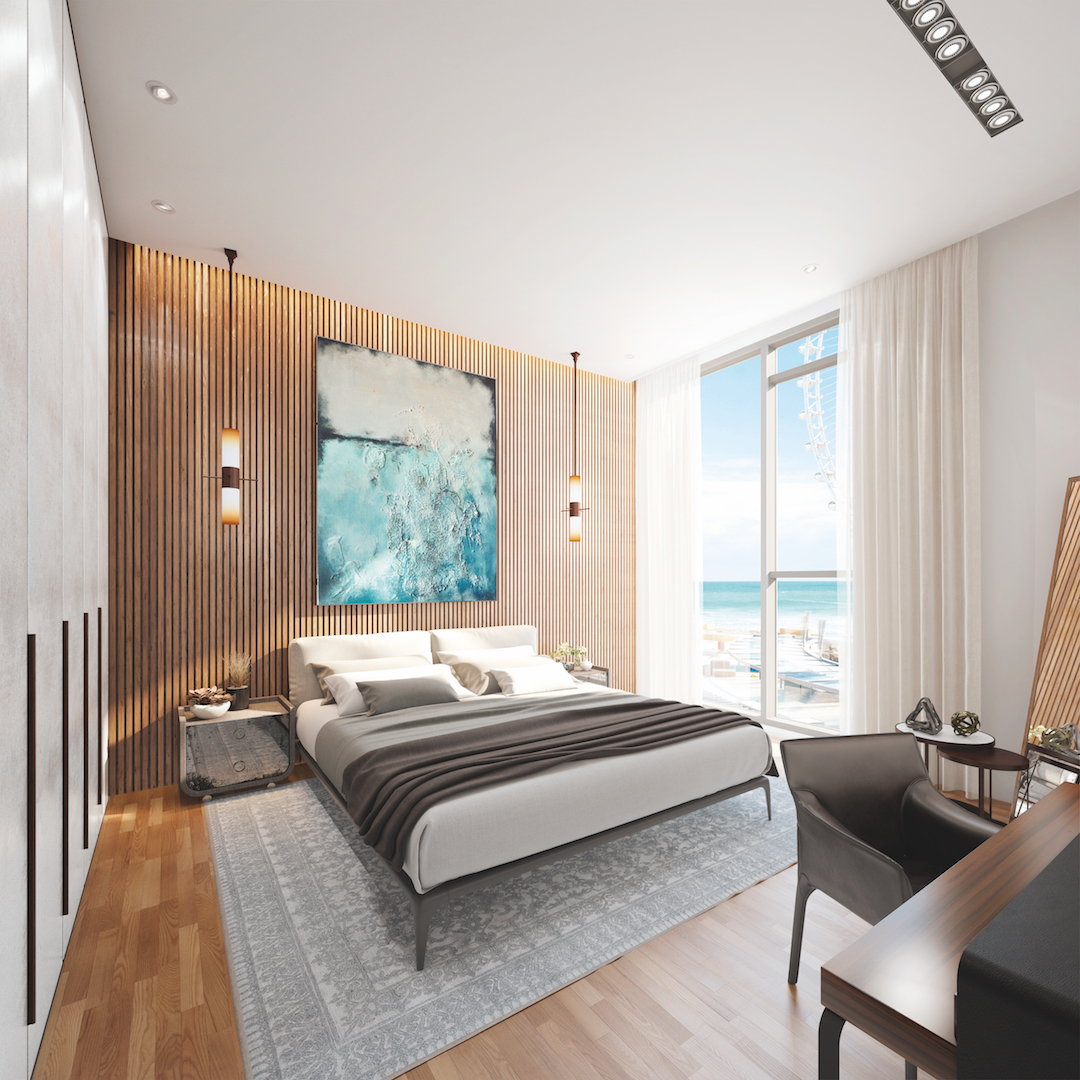 people can enjoy that space. We don’t want residents to come out of their apartments and be greeted by cars,” says Brian Schofield, Vice President of Projects at Meraas

Construction of all the districts is around a year from being finished with the residences due for handover to owners in the first quarter of 2018. There are around 700 apartments spread across 10 buildings, all of which will have either views of the sea or the retail and entertainment district.

Schofield explains that recent heavy rains on the island’s unfinished roads made it tricky to drive so they were rolled and graded on a daily basis to make it safe and to avoid dust spreading across the site.

After the transport hub, you arrive at the terminal for Ain Dubai and the main plaza, which is oriented around the base of the wheel with streets leading off it. With around 150 retail and food and beverage outlets spread over two floors, this will be the island’s main tourist destination with a similar feel of New York’s Time Square or Clarke Quay in Singapore thanks to multiple giant media screens, says Scholfield.

Buildings are oriented to create airways for wind to blow through to produce an open-air environment with enough of a breeze to make it comfortable. Huge “mushrooms”, which look a bit like giant umbrellas or artificial trees, will provide about 50% shade and a separate canopy has a shading effect as well.

Ain Dubai capsules come through the middle of a building at the base of the wheel, where passengers will hop on and off. Each of the wheel’s four stabilising legs is 126 metres long and thick enough to park 15 double decker buses nose to tail inside. The far left leg contains an elevator for maintenance within the structure. However, the temperature inside gets so high that it requires 10 air-conditioning units just to keep temperatures to a manageable 50 degrees Celsius, Schofield says.

Innovative new construction materials feature throughout the Bluewaters project. For example, the glass used for Ain Dubai’s passenger pods is similar to that used in fighter planes. The facades of the retail buildings contain as many as 200 different materials. “We’re always exploring new technologies and materials to make it different and vibrant,” Schofield says.

But what really stands out from a construction standpoint is the size and scale of the whole project, not just Ain Dubai, and how complex it must have been to construct every component simultaneously. Each district has a separate contractor and coordinating their efforts was certainly a challenge, Schofield says.

“It’s not normal to build everything at once,” he says. “Normally you would start at the furthest end of the island and build your way out. But everything is going on at the same time here because we don’t want people to be living on a building side.

“It takes a lot of effort, compromise and teamwork,” he adds. “We have regular weekly meetings. Many dedicated teams. Each main contractor has their own managers because things change depending on the delivery cycle. It’s incredibly complex.”

The whole project is building to a conclusion in the first quarter of next year, though it looks as though the wheel will be completed sometime later. When that does finally happen, Dubai will have a new iconic landmark to add to Burj Al Arab and Burj Khalifa.