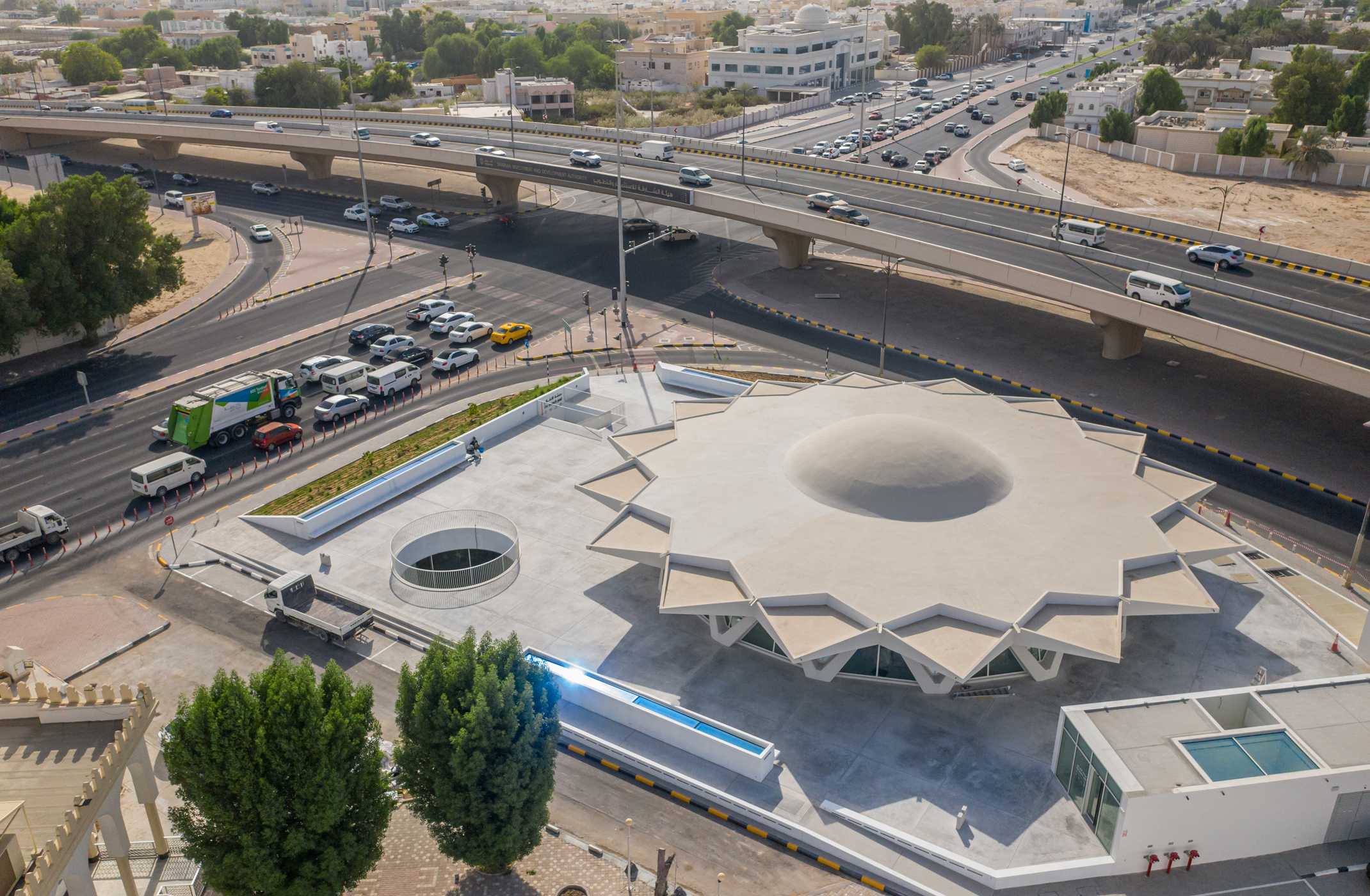 Sharjah Art Foundation (SAF) announced the completion of a major renovation of The Flying Saucer, a Sharjah architectural landmark acquired by the Foundation in 2012. Used as a SAF venue since 2015, the futuristic, Brutalist structure was constructed in the mid-1970s in the heart of downtown Sharjah.

Modified over the decades to house various businesses, starting as a one-stop-shop restaurant, newsstand, tobacconist, gift shop, patisserie and delicatessen, the renovation, led by SAF and SpaceContinuum Design Studio, helmed by SpaceContinuum founder Mona El Mousfy, has restored the original character of the building, while also introducing a new outdoor public space and lower-level community space with a café, library, sunken courtyard and activity spaces. An urban nodal space for the Foundation and the emirate at large, the preserved and adapted building and site will serve as a place for community gathering around art public programmes and events.

The newly-renovated Flying Saucer will reopen to the public on 26 September 26, 2020, with Nowhere Less Now3 [flying saucer], a new multimedia installation by Lindsay Seers and Keith Sargent which responds to the building’s architecture.

“The Flying Saucer has been beloved by generations of Sharjah residents since its opening in the late 1970s. It was important that we not only preserve its characteristic structure but also restore it for our community as a space for convening, learning and creating,” said Hoor Al Qasimi, director of Sharjah Art Foundation. “While preserving the original building’s distinctive qualities, the project also adds a new layer of vibrancy to the space and allows us to better engage with communities across the emirate—an ethos that guides all of the Foundation’s architectural and historic preservation work. We are thrilled to reopen The Flying Saucer with Lindsay Seers and Keith Sargent’s new multimedia installation that will activate the space and respond to its architecture.”

Sitting at the intersection of several residential areas near the centre of the city, The Flying Saucer—with its distinctive design as well as spatial and key location in the heart of urban life—has long been inscribed in the collective cultural memory and place identity of Sharjah residents. Constructed in the mid-1970s and opened in 1978, the building’s architecture draws from a combination of space-age and Brutalist influences that permeated the period. Notable elements of its design include a wide circular dome floating above a ring of eight columns, a star-shaped canopy projecting beyond a fully glazed panoramic façade and light and open interior space supported by angled V-shaped pillars.

Initially conceived as a French-inspired store combining a restaurant, newsstand, tobacconist, gift shop, patisserie and delicatessen, The Flying Saucer has undergone a series of functional and design transformations over the past several decades. As the building changed hands—becoming a supermarket and then a fast food restaurant—its architecture was modified through the incorporation of an annex, interior partitions and a false ceiling that hid the concrete dome and ceiling structure from the inside. The peripheral structural pillars were also cladded with silver aluminium panels.

Three years after acquiring the building in 2012, Sharjah Art Foundation began the process of returning The Flying Saucer to its prior form in preparation for the exhibition 1980-Today: Exhibitions in the United Arab Emirates, curated by Hoor Al Qasimi for the National Pavilion UAE La Biennale di Venezia at the 56th International Art Exhibition that year. For this temporary renovation, the building was stripped of its exterior cladding and interior elements, including the false ceiling and partitions, fully revealing its over seven-metre high dome and impressive structure.

The current renovation project, which began in 2018, continues the work started by the Foundation in 2015, removing the added annex and moving all support functions to the underground in order to restore the building to its original silhouette and enhance the open character of the interior gallery space. This intervention also includes two new additions designed to complement the building spatially and programmatically and support its function as a community hub and resource. The first is an exterior Platform, an open, outdoor public space designed to act as a spatial and programmatic extension of The Flying Saucer, that will host social events, performances and outdoor art installations. The second major addition is the underground Launch Pad, a community space that houses:

• The ‘Green Crater,’ a sunken circular courtyard filled with lush vegetation and natural light
• A convivial, multi-activity café overlooking the ‘Green Crater’
• An extensive curated library
• Various programmes including film screenings, workshops, performances and readings to be held in the open café or library spaces or in one of several enclosed ‘pods,’ including the ‘Meeting Pod’ designed for smaller convenings; the larger, multipurpose ‘Activation Pod’; or the ‘Craft Pod’ equipped for art workshops and hands-on activities

Innovation is at the core: TUTTOFOOD 2021