Istanbul-based Tabanlıoğlu Architects, has announced the reconstruction of the Ataturk Cultural Center in Istanbul (AKM). The center, which will overlook the city’s iconic Taksim Square, will be a reflection of Turkey’s modernisation efforts. The new project is expected to be completed in 2019.

The new Atatürk Cultural Center (AKM) transforms a 1960’s classic for cultural life into a new urban magnet for future generations. The new contemporary culture center will appeal to a general public greater than other facilities have previously been possible to accommodate. Although it will mainly serve as a new opera house, the center will also have venues ranging from cinema and theatre to exhibition halls, cafes and restaurants. 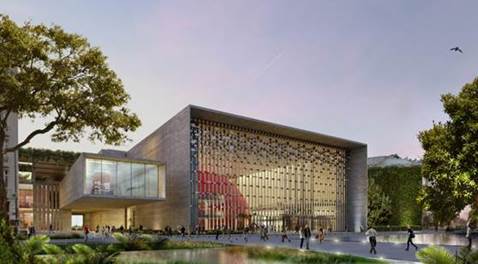 The Center will be built to accommodate performances of international stature and designed to contemporary requirements and current technologies. As a very comprehensive urban structure, the center is also expected to be a major attraction for the city’s residents and thousands of tourists visiting from around the world. The announcement of the new Ataturk Cultural Center was made by Turkish President Recep Tayyip Erdoğan.

Murat Tabanlıoğlu, founder of Tabanlioglu Architects, and architect for the center, said: “It is very gratifying to have taken over such a heritage, beyond that, of course, we see this building to be a permanent cultural symbol for Turkey and the world. I was very excited to be invited by the Ministry of Culture and Tourism months ago to work on this project.”