This campus in Turkey by Era Architects is inspired natural topography! 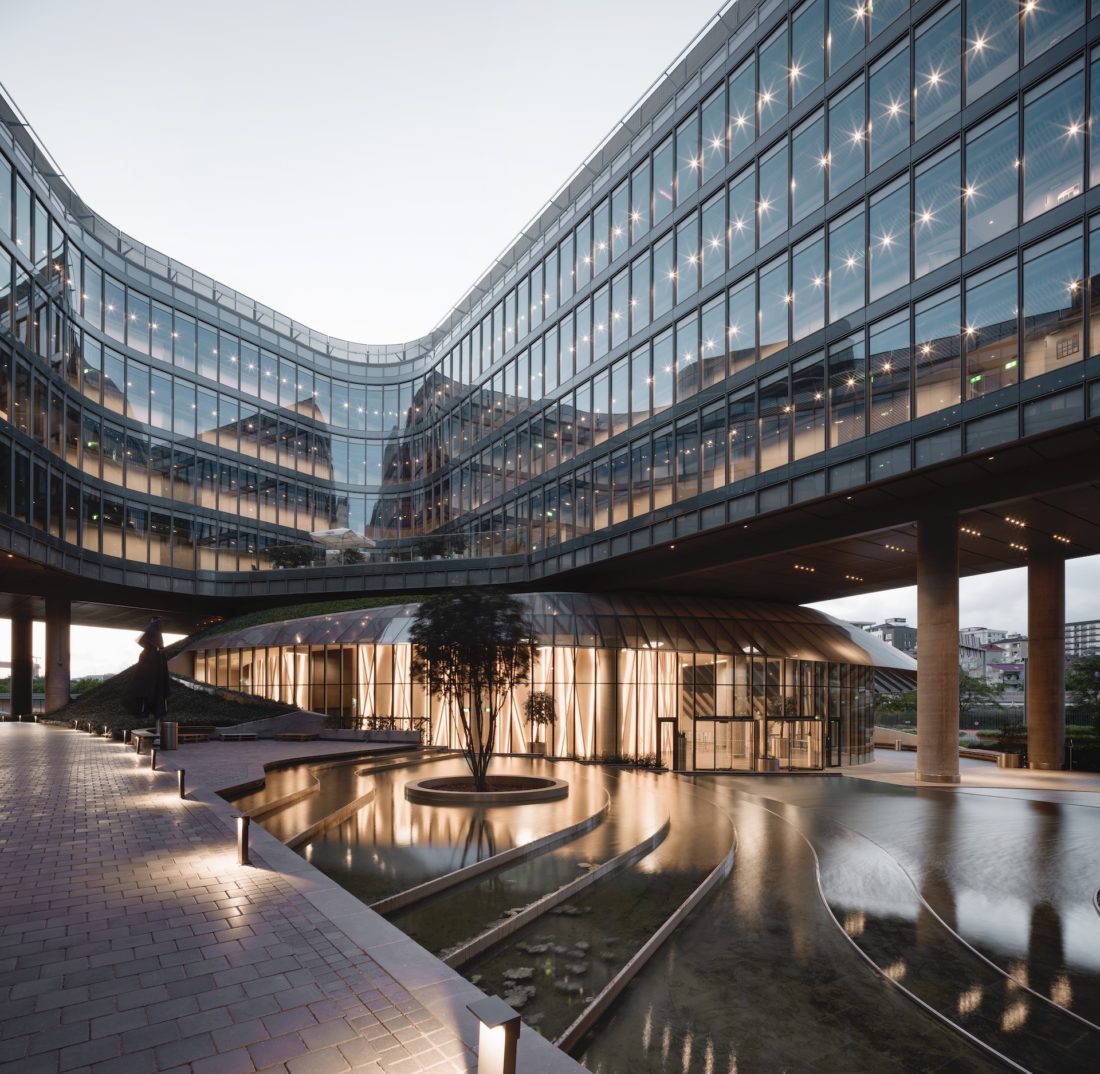 Located between major highways of Istanbul, D-100 and TEM, in the proximity of Sabiha Gökçen Airport in Pendik, Istanbul, the project transforms an old industrial chemical factory land into a technology company campus for one of the most dynamic Turkish banks. Garanti BBVA Bank Technology Campus by Era Architects is inspired by the natural topography around the site. The goal of creating a clear contrast to the surroundings’ unorganised urban fabric, a crystal volume as the main working environment is lying gently over several artificial hills sheltering various functions such as two 600 and 200 seats auditoriums, educational meeting spaces, cafeterias, lounges on bridges, data centre and many other functions. With approximately 142,000sqm total built area and 51,000sqm site are, the campus programme is configured into three major sections: a 53,500sqm open offices, a 16,000sqm auditorium, educational spaces and cafeterias, a 72,500sqm for parking, a Tier 4 data centre, a sport centre, common spaces, archives and service areas.

The horizontal floating volume connects the two plots of the site by the introduction of hanged bridges and glazed screen walls over 30 meters spans. The buildings’ main structure is a flat slab concrete system at the offices and exposed frame structure at the lower levels. Along the outer skin, office spaces have been freed out of columns by 4.5 to 11m deep cantilevers. All four office levels are similar. The widest cantilevering areas are supported by large composite beams placed on the roof. The four levels office block stands partially on a transfer structure to enable the widespan volume for the auditorium located within one of the hills.

Flexibility and maximising the daylight is one of the major criteria for the working spaces, the accessibility to the office spaces has been organised through a set of elevated open courtyards where the users circulate and also have the ability to rest and socialise at lounges placed on bridges allowing many surprising views and vistas. The transparency is used to integrate the working spaces with the city, allowing the users to interact and to create different experiences throughout the year.

A strong contrast awaits the user as the elevated horizontal crystal has a sharp and decisive cantilevered appearance from outside reflecting the sky, the landscape and the city yet the inner main axis structured with rather by voids.

The user circulates through the outdoor ground levels following a path which undulates like a creek between the artificial hills as with the ground outdoor levels, the elevated volume has been designed to allow an experience of the journey for the everyday user. Ponds are designed to enhance the cooling effect on the outdoors as well as on the glazed facades to reduce the temperature gain during hot seasons. 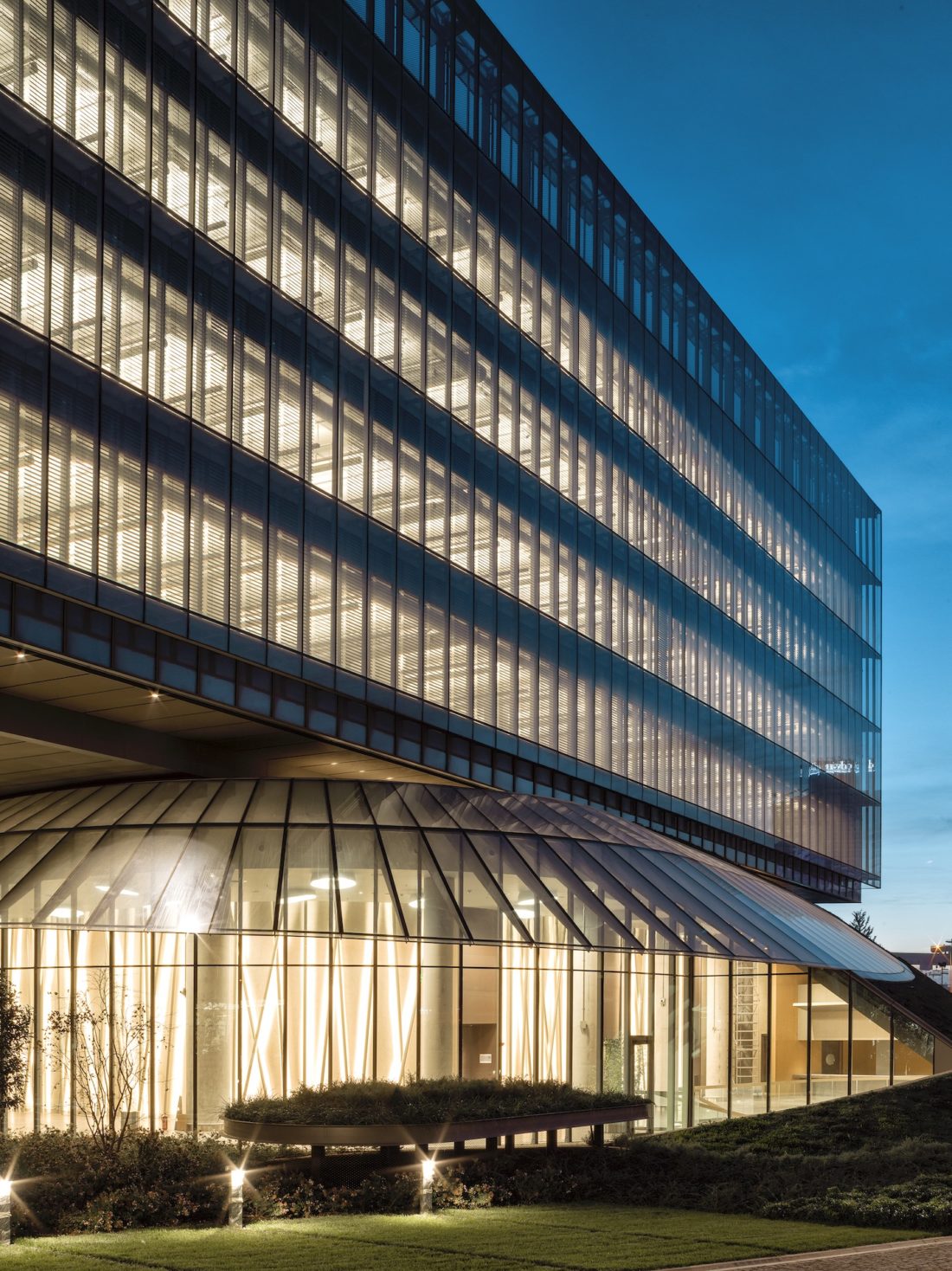 The building implements the sustainability principles overall from single and double skin facade systems with dynamic sun shading integrated with lighting, to special heating and cooling systems providing the inner spaces with hundred percent fresh air. The facades have been designed as unitised systems allowing the high quality in terms of heat and acoustic insulation as the site is surrounded by highways with heavy traffic.

During the initial stages of design when the site has been acquired, the old chemical factory has been removed. The soil has been checked further for contamination. The remaining have been dismantled into several different categories and have been sent for recycling and certified. The existing pine trees from the old factory has been kept and few displaced into newer locations within the site. The rainwater harvesting is used for the landscape mainly. The green hills were obtained by a system of cables embedded into the sedum surface from top to bottom of the artificial hills. It is one of the largest green roof system applications in Turkey. The campus has received Leed Gold certificate.

Look up to the ceiling!