An apartment scheme in Dubai caters to the city’s creative community with studio spaces, a screening room and a coworking hub at its heart

Disillusionment with Dubai’s faceless blocks of flats prompted Mohammed Zaal to reimagine the way the city’s residents interact. Canvas, the first offering from his real estate firm, KOA, is aimed at the type of cultured, designsavvy young professionals who appreciate art and architecture – and are seeking a settled community in which they can get to know their neighbours.

“I really felt there was an opportunity for me to introduce something different,” the entrepreneur said. “A lot of people are not interested in property in Dubai and first-time buyers just settle for whatever there is – there’s not anything that people really fall in love with.” Canvas is different. Located off Emirates Road, near Mohammed bin Rashid Gardens, the uncommonly verdant development will offer relief from the urban jungle just 20 minutes’ drive from the city. The 70-flat scheme include studios and one, two and three-bedroom apartments, as well as a single four-bedroom penthouse. Forty-four went on sale last month, priced $272 to $327 per square foot, and the project is scheduled for completion in December.

Affording the end user personalisation was of paramount importance. No fewer than 41 layouts are on offer to cater to the diverse tastes of its future residents. “We don’t even publish out floor plans,”

Zaal says. “The idea is that you sit down and find something that’s suited to your needs instead of having generic A, B, C, D, or whatever this is, or Spanish-style – this is not what we’re about. “We’re more of a boutique developer focusing on craftsmanship and soul. Those are two of the pillars of the development. Canvas is literally that – it’s your canvas.”

The city is changing; the way people think about design and the spaces they live in is evolving, and we wanted to be part of that

OUT OF OFFICE
Central to the scheme is a coworking hub. Such spaces offer a welcoming, supportive atmosphere for the increasing number of professionals who work outside the office, whether they’re self-employed or merely in need of a break from colleagues. Canvas will house photography studios and even a screening room; art exhibitions may also be held within the grounds.

Zaal says: “There have been one or two attempts at coworking spaces in Dubai, but not of this scale. We’re looking at people who appreciate design, art, creativity, which is evident in the younger generation. “The amenities are extensive. It’s a members’ community, so when you’re a resident you’re automatically a member, if you sign up for the coworking space you get to use all of the grounds as well.”

Other facilities will include a daycare centre, a restaurant and a gourmet market. More conventional leisure facilities aren’t overlooked – there’s a gym, salon, hammam and three swimming pools.

“The worst thing for me was living  an apartment block and going down to the swimming pool or the gym and you’re there by yourself, which is the case everywhere – they’re just these sort of amenities that are a must in a building and no one ever uses them,” he says. “People like to be in surroundings that are sociable. Even if you’re at the gym, if there are people there you’re inspired; if they’re running next to you, you want to run – it’s natural. We wanted to create a community where it’s not just residents, it’s members.” 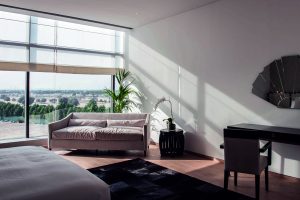 He previously co-owned Anarchitect, also based in Dubai, and is a founding member of Design Ras Al Khor (DRAK), an initiative founded by pioneering regional creatives. He teamed up with Zaal last July. “Our visions were very much aligned,” Zaharna says. “What Mohammed is doing in the real estate world, we’re trying to do in the architectural realm as well.

“With KOA Canvas we’re really trying to reimagine and reinterpret the way people think about buildings and the way they live and design in general, and to start taking a more creative approach to all these things that we really just take for granted.

“The city is changing; the way people think about design and the spaces they live in is quickly evolving, and we really wanted to be part of that.”

Conservation is at the forefront of Canvas, particularly with regards to safeguarding biodiversity. Prior to launching KOA, Zaal was the CEO of Al Barari, the firm behind the eponymous community on the edge of Dubai.

The vast development, 80 per cent of which is green space, was created by his father, Zaal Mohamed Zaal, who has pioneered sustainable building and horticulture in the country. Canvas is set within serene landscaped grounds in which four-fifths of plants are indigenous. Two disused office buildings were incorporated into the project instead of being knocked down.

“They weren’t being used and we thought it was an opportunity for us to do something different in Dubai instead of just using a greenfield site or demolishing something old,” Zaal says.

“There’s been a lot of press recently about old architecture and what people are doing to the city’s old structures, so it’s an opportunity for us – we’re upcycling this development. The new generation really appreciates that.”

UNUSUAL MATERIALS
Canvas is characterised by an innovative use of materials, the selection of which was inspired by the rich ecosystem surrounding the scheme. One of the more unusual ones is thermally modified tulip wood. 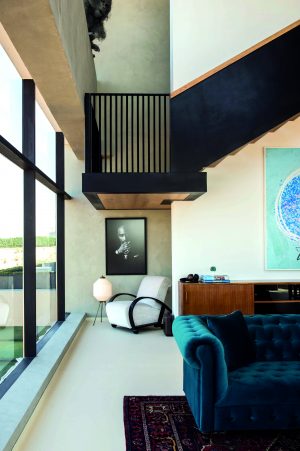 Zaharna says: “It’s the first time this material has been used in the Middle East. “It can be used outside in this climate – it can endure humidity, extreme heat, rain, sunshine, all of it. We don’t have to deal with snow here, but it can deal with that too!” He adds: “It’s been treated in such a way that the next step would be combustion, if it was to become a single degree hotter.”

From an architectural perspective, it was important to embed nature into modern residential areas and leverage the neighbouring natural scenery to create continuity throughout the various spaces. Water features, open courtyards and natural light have been used to enhance the wider landscape, and stone and timber have been used inside and out. “Using a stone on a façade is something that’s not typically or commonly done here. It’s about playing with textures and thinking about how the building will look like in 50 years’ time. We’re building for the future.”