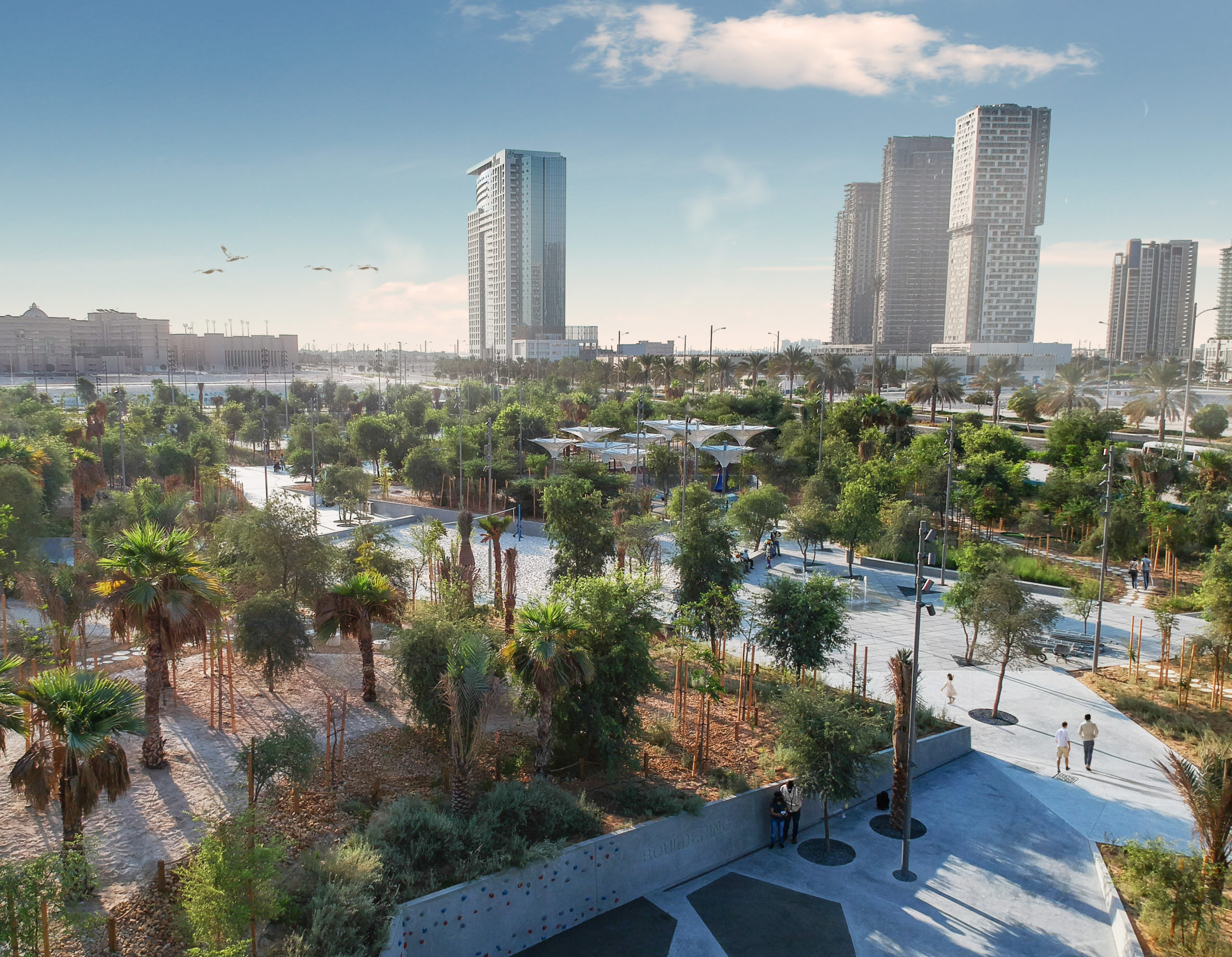 With its innovative biodiversity, microclimate and social activities, Al Fay Park in Abu Dhabi is a paradigm shift in how to design and implement nature in the dense megacities of the Middle East.

A new kind of urban nature park has seen the light of day in Abu Dhabi. Gone are the water-consuming and soulless ‘Las Vegas landscapes’ of the past. Enter Al Fay Park – a new 27,500sqm public park in downtown Abu Dhabi that signals a new kind of Middle Eastern city development: Driven by inclusive nature rather than iconic buildings. Al Fay Park is Arabic for “The Shade Park”, designed by Danish nature-based design studio SLA for the client Abu Dhabi Department of Municipalities and Transport and is a game-changer in how to design and implement city nature in the dense megacities of the Middle East. The park is the first urban park in UAE that uses biodiversity to enhance the local microclimate as well as the social public realm. 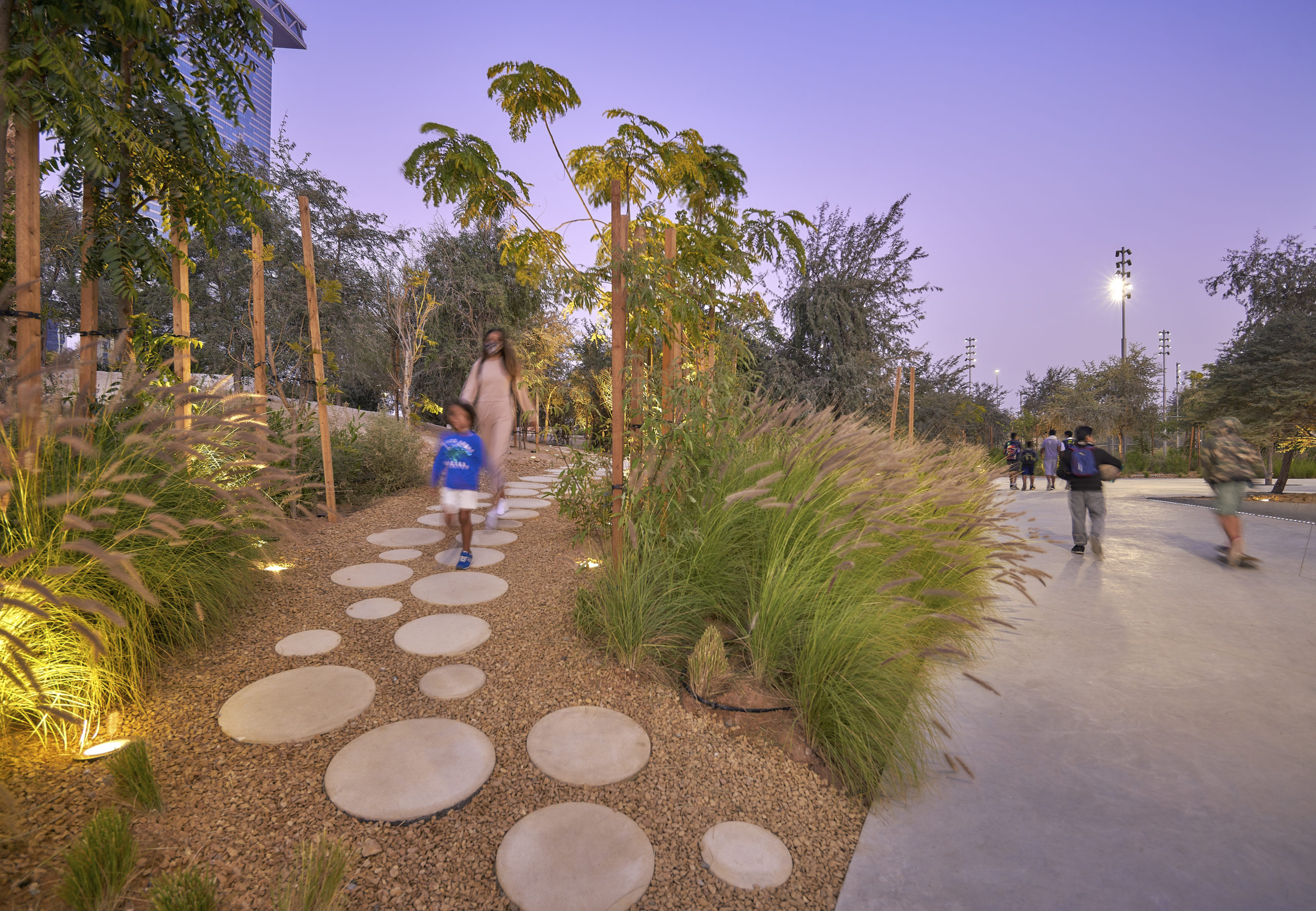 The park design is devised through SLA’s in-house biologists and planting experts’ yearlong research studies of the region’s unique nature and wildlife. Research published in SLA’s own internal plant book covering all the native plant species of the UAE, their optimal growing and living conditions, and how to integrate them into the design. “Al Fay Park is a new type of forest park in Abu Dhabi. Through our extensive research in the region’s flora and fauna, we create a new paradigm for how to think and design the public realm in the Middle East. Al Fay Park is a celebration of Abu Dhabi’s native nature and culture and a prime example of how to maximize climate action, increase life-quality, and radically improve the biodiversity of an entire city – all on a former sand site,” says Rasmus Astrup, design principal and partner at SLA. 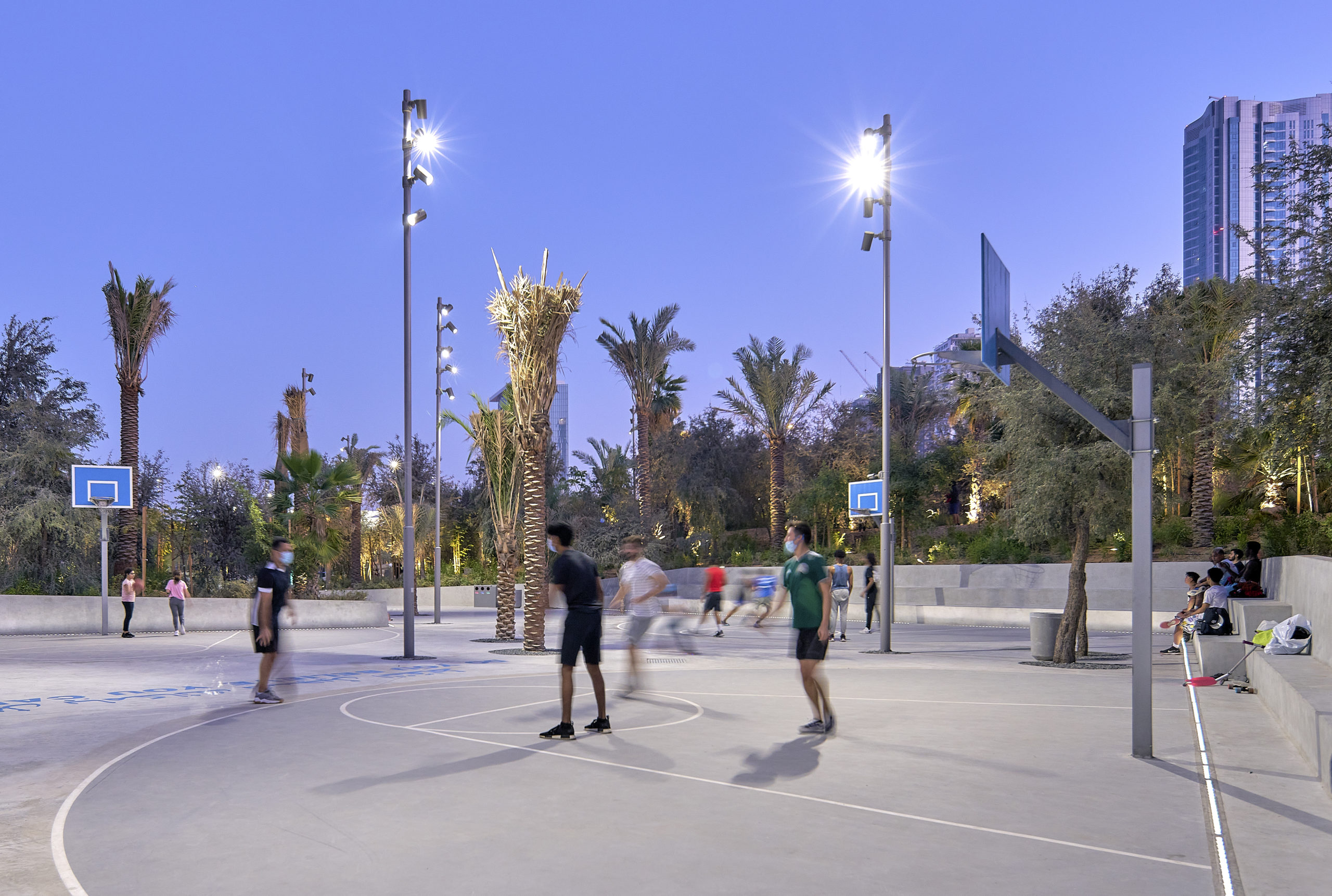 As the first biodiversity park in the UAE, Al Fay Park contains more than 2,000 native trees and bushes – including the national Ghaf trees that have been replanted from desert nurseries into the park – all specifically chosen to strengthen biodiversity for both plants and wildlife and to maximize natural cooling throughout the park. The resulting microclimate reduces traffic noise and temperature and creates a distinct forest-like environment. The specifically designed sloping entrances funnels the cooler southern breeze down into the park while local grasses and bushes reduce sand infiltration.

“Al Fay Park is specifically designed to provide both biological, environmental and social benefits to Abu Dhabi. The density of the trees, the soil design, the irrigation using solely recirculated water, and the sole use of native species not only ensure that the park has radically reduced its irrigation by 40 percent compared to conventional parks. The planting also attracts bees, pollinators, birds and animals, providing a lush and lively atmosphere in the middle of Abu Dhabi – this is a 100 percent birdsong guaranty! Lastly, the microclimate design provides the best possible social ecosystem for play, sports and leisure – making Al Fay Park both socially and climatically ‘the coolest place in town,” says Astrup. 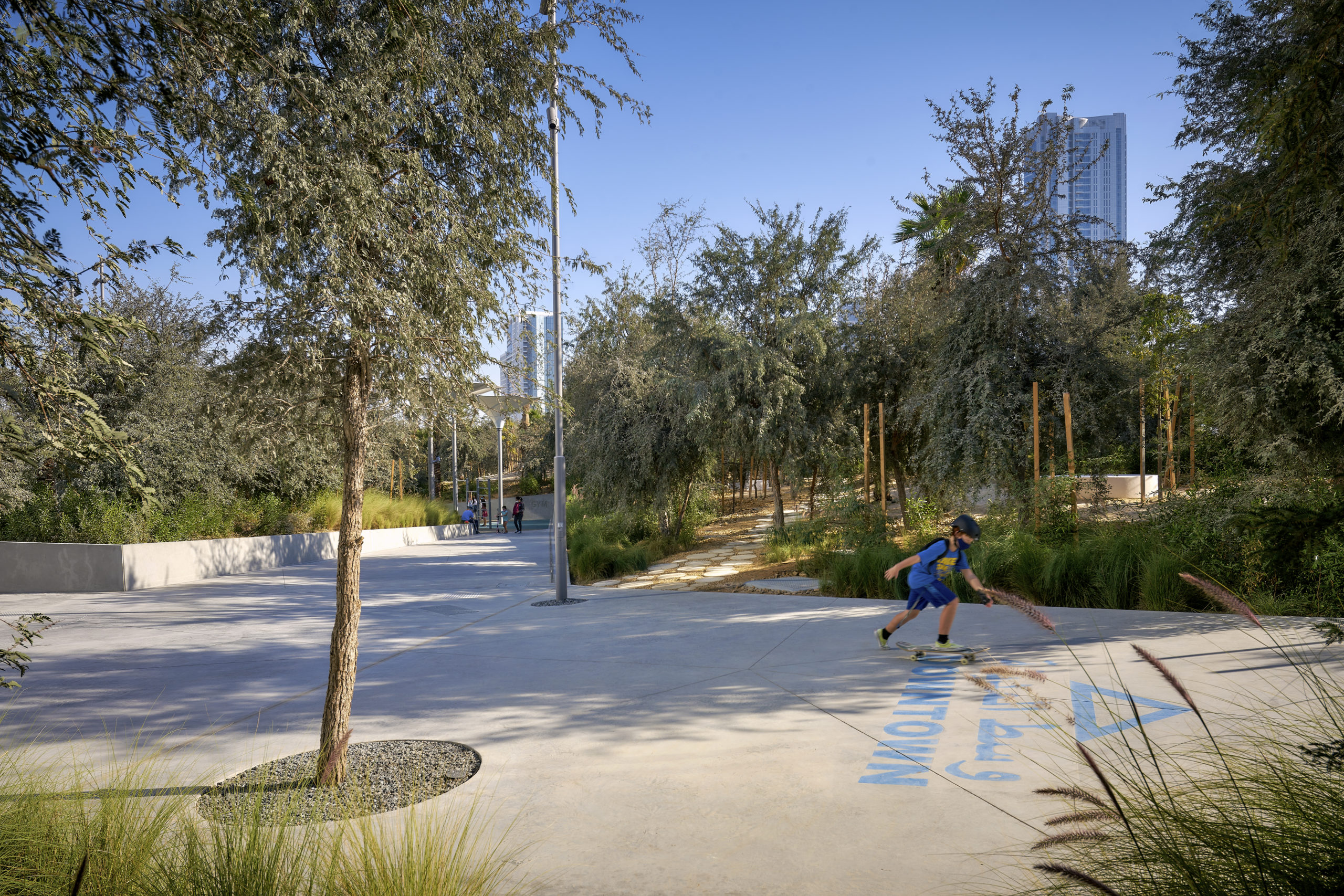 Benefitting from the optimised microclimate, Al Fay Park is buzzing with social activities such as multiple sports facilities, playgrounds, street fitness, climbing walls, minigolf, food trucks, and a host of informal outdoor seating areas. Along the edge of the park, a winding Forest Track invites visitors to explore sensuous and wild nature experiences amongst the flowers and grasses and under the canopies. “The world-class design of Al Fay Park has created an environment that encourages community members to socially engage with one another while also connecting with the nature that surrounds them. We’re looking forward to witnessing the growth of this dynamic park that will benefit Abu Dhabi for future generations to come,” says Latifa Al Hallami, Acting Director of Urban Growth, at the Department of Municipalities and Transport. Al Fay Park is the Middle East’s first showcase of how to strengthen urban biodiversity while creating a cool, comfortable and unique round-the-clock public realm for all residents and visitors to meet, play, and live. 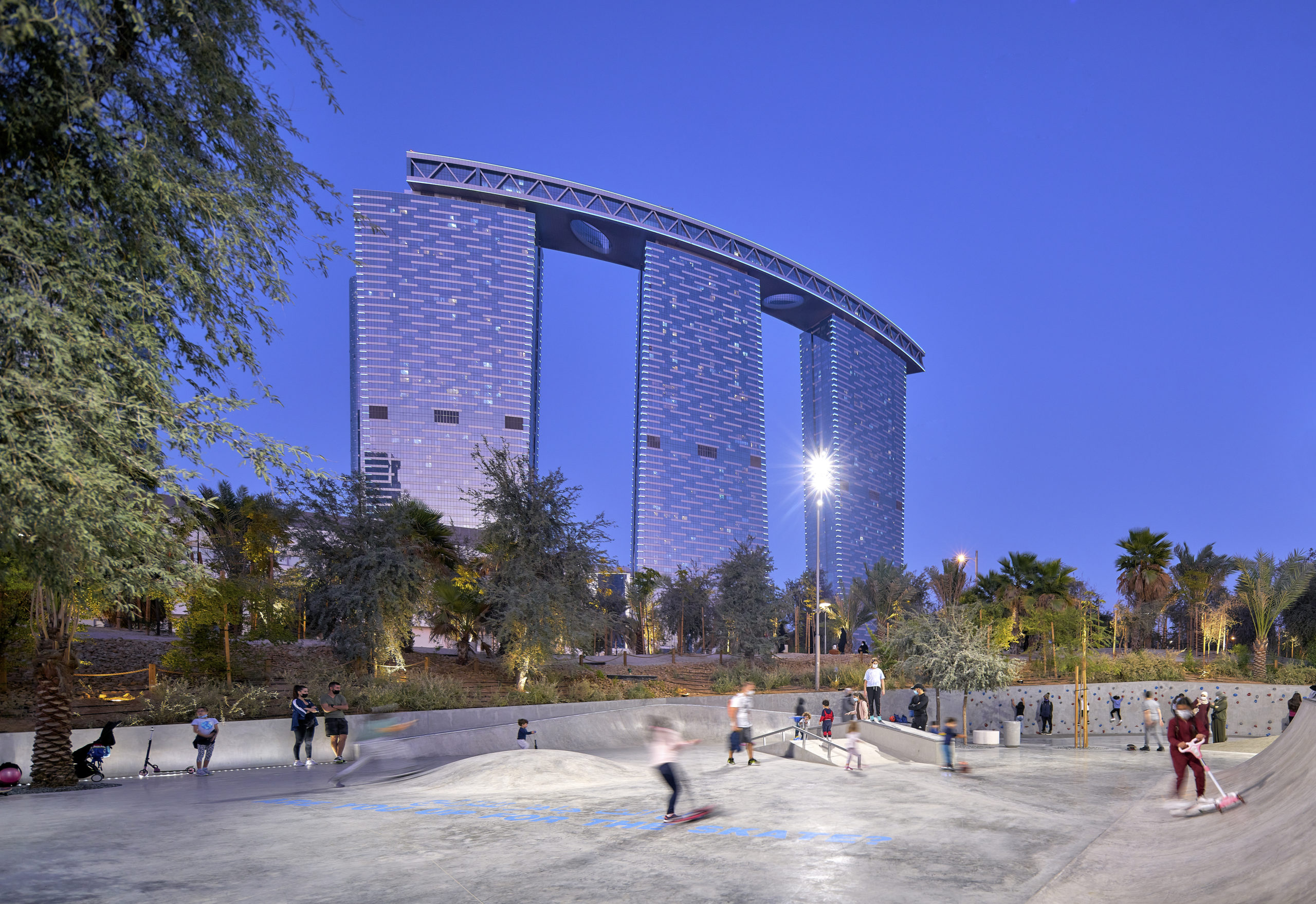