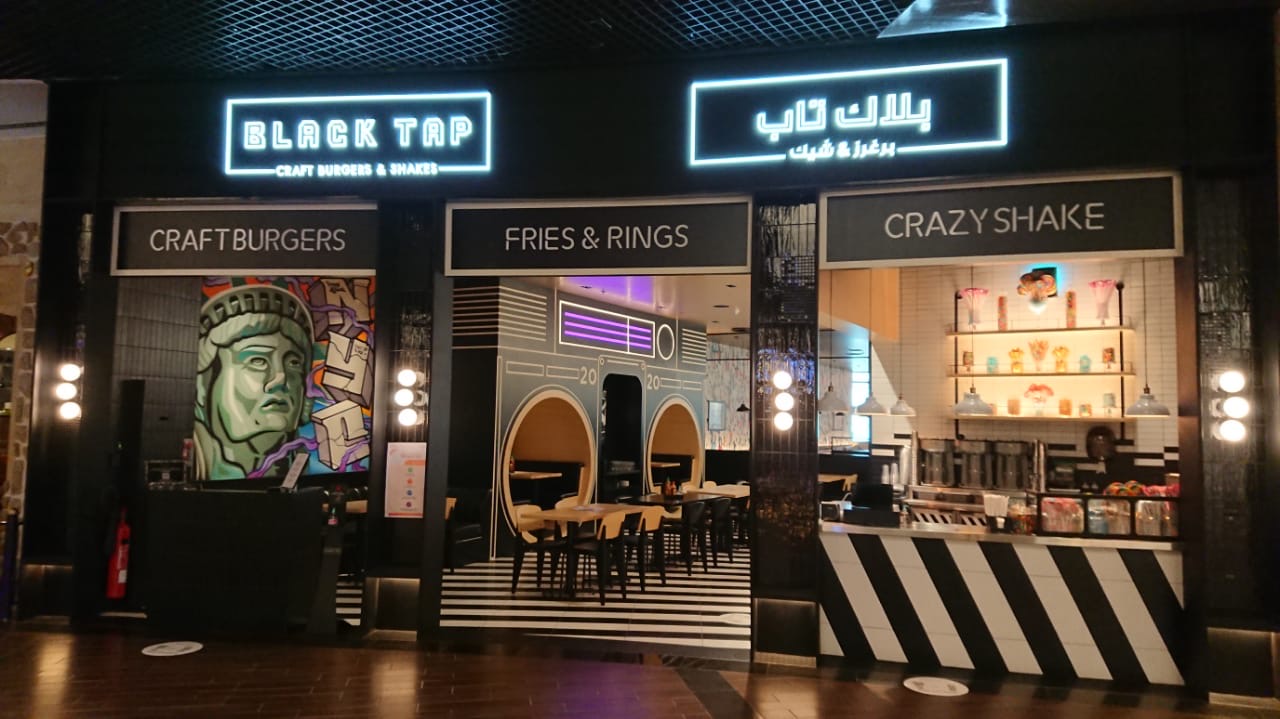 Broadway Interiors worked their magic on the Black Tap project in Dubai Mall. Upon arriving the guests would see the interpretation of the original Black Tap Soho shopfront fused with touches of the Black Tap Las Vegas façade, which helps transport its guests to the hustle and bustle of the NYC Boroughs with their individuality and quintessential appearance!

The monochromatic approach of some of New York’s iconic buildings, is developed through the use of block colour, primarily using black and white ceramic tiles, retaining an overall neutral palette, portraying the darker, edgy side of the City. This is then softened by timber tones in a mellow, brown hue, through the furniture and bar frontage. 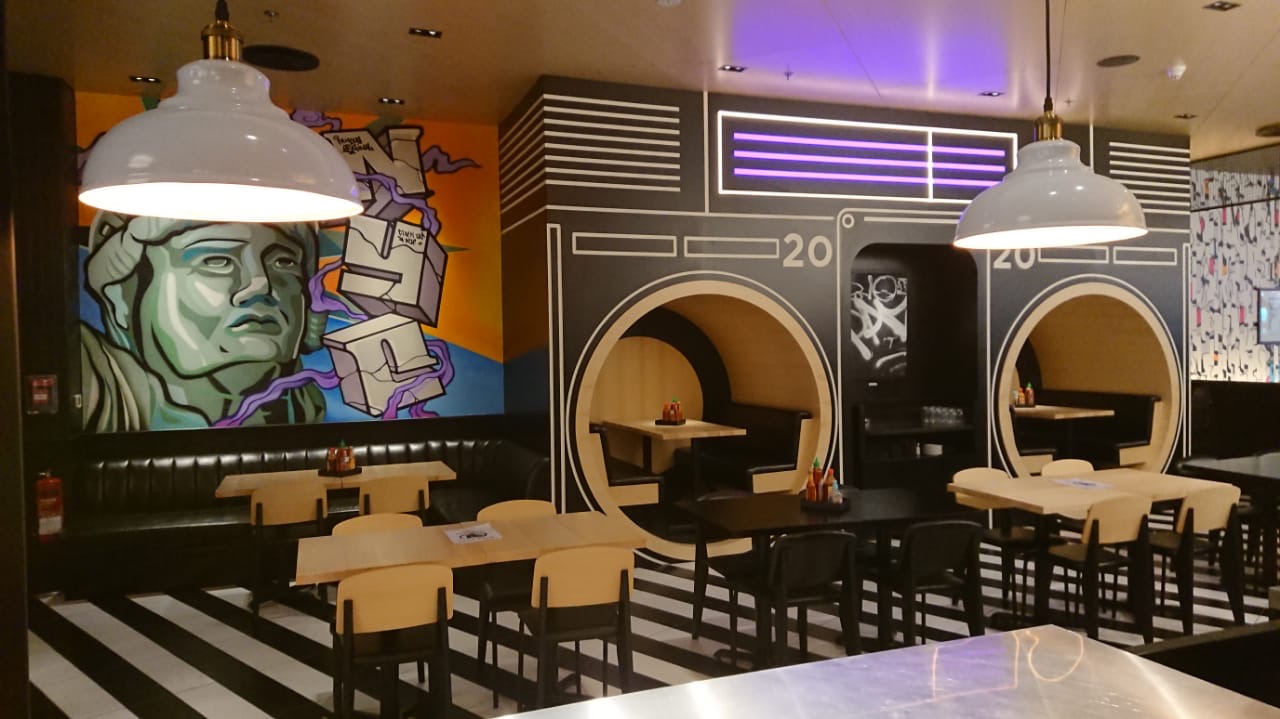 Chris Barnes, founder and managing director of Broadway Interiors, said: “Focussed lighting takes the form of conical pendants, characterising the New York street lights and bright neon lights, reminiscent of Times Square, add colour, and additional illumination. New original artwork and graphics, have been commissioned to represent the street culture and art capital of the world, representative of the diversity throughout the boroughs of New York from the bronx; birthplace of hip hop and rap, to hip Brooklyn and Manhattan. A new graffiti mural depicting the Statue of Liberty commissioned by a local artist is a feature wall and street music art is visible throughout.”

Two cosy booths inside the speaker portals of a large Boombox adorned with neon decals to emphasise the 90’s retro look of the player, provide Instagram photo opportunities. On the opposite side is another feature wall, each retro cassette carefully stacked on top of each other so the famous tunes of Black tap can be seen. Pick your fondly remembered favourite from the NYC of the 90’s. 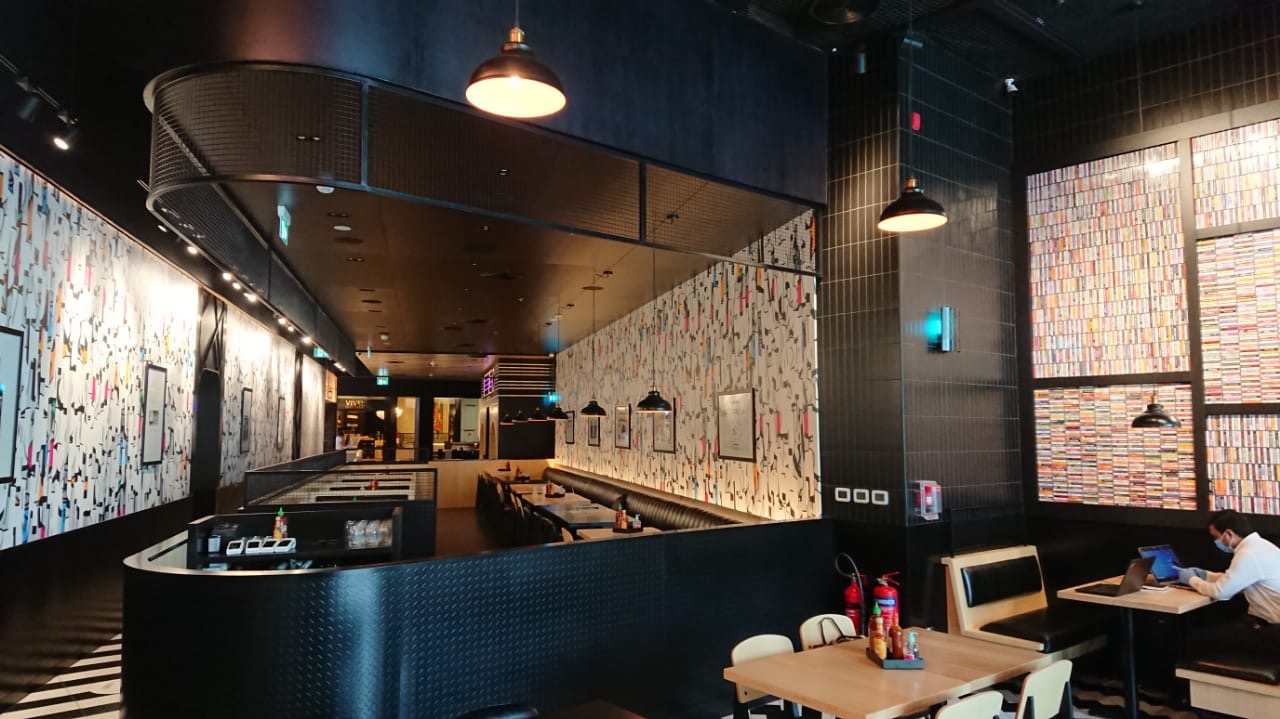 The Black Tap milkshakes station is strategically placed along the front of the shop from the Mall entrance, where the milkshakes are created and you can watch this innovative food and drinks art take form. Custom designed shelving, provide additional colourful jar storage and a focal point, with a background that is a stark contrast.