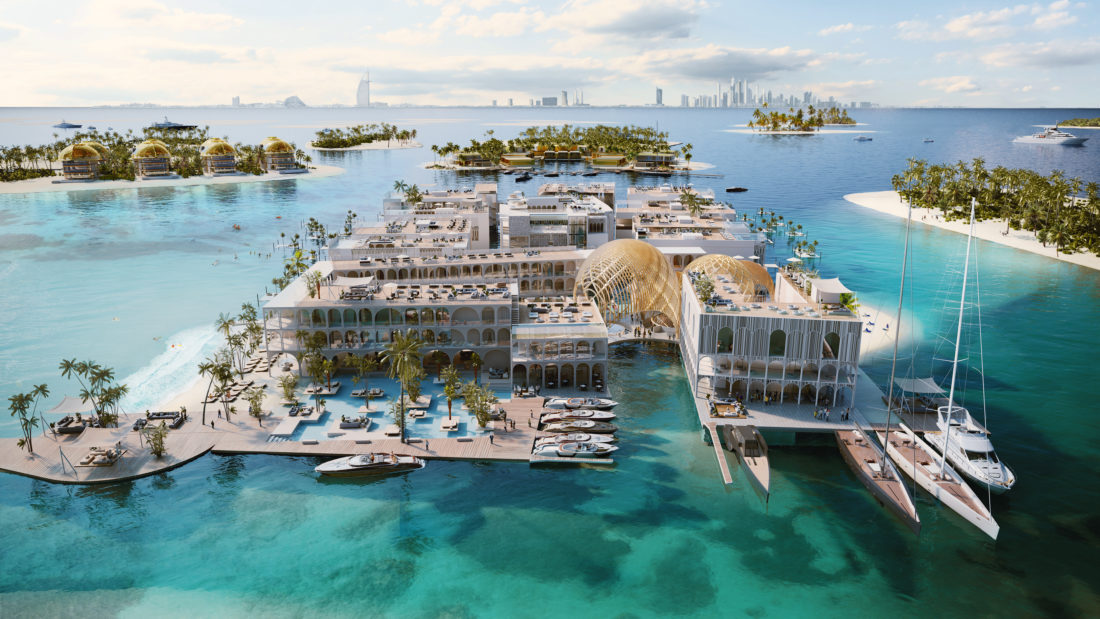 Riccardo Robustini, director at UNICA Architects, talks about the architecture built on water

Human civilisation has taken shape around the water. Water has always been an element of nature, constantly surrounded by life and flourishing economies. Water is also a source of magic. The endless and indefinable movement of the iridescent surface provides a sense of calm and serenity for those who live close to it. In the last century, architects, urban planners, investors, and politicians have all tried to occupy the sea in different ways, captivated by the complexity of coastal communities and their vibrancy. Coastal areas have always been able to attract tourists and investors.

Dubai, together with several other countries, has begun to develop an intense relationship with the water, bringing the sea inside the urban environment to create a dynamic and vibrant waterscape within the city, while ever expanding the city towards the sea through artificial islands, and creating a sort of Yin and Yang relationship between the natural and the artificial. In this sense, Dubai has promoted innovative ways to intertwine water and architecture. It is unquestionable that its relationship with water has become one of the major initiatives of city planning. A similar philosophy has generated around the world, a new paradigm in the design of economical, sustainable floating architecture, which has developed intensively in the past years. Designers have been interpreting the relationship between man and water in new ways.

After several years of visionary projects and small-scale applications, floating architecture is now enjoying an important moment of technical, financial, and political investment in multiple parts of the world. The World Islands-Dubai For developers, one of the most interesting applications of the floating architecture is clearly in the housing and hospitality sector. When we were approached by Kleindienst to design a floating 400 key resort with 180 underwater rooms, inspired by Venetian architecture, we immediately understood the intellectual and technical challenge of the project, but also the great opportunity. The plot was an area of the sea in the middle of the ocean with no tangible references to its surroundings. We travelled immediately to Venice, with the vision to grasp the soul of the city, rather than to be inspired by the historical architecture. It was clear after few days that the real protagonist of the city was the stage itself rather than the actor; the water in Venice is constantly hugging the city and its visitors, creating this magical sensation of “belonging” rather than simply being a spectator. As we began to design, we understood that the proposed floating structure was the best way to reproduce this feeling, allowing the water to gently enter some of the semi-public areas.

The idea was to recreate the original experience of Venice, where people would access a building directly with flat-bottomed boats. As a second stage of the project, we were asked to design a complimentary floating beach with a yacht club and an underwater convention centre. No land limitation and no restrictions in terms of shape and geometry; the flexibility of the construction system allowed for any client and design suggestion. As we finalised the project the potential of using a floating structure to colonise the sea in a more adaptable and cost-effective way, was clear to the entire team. We proposed to the client to re-plan one of the two harbours included in the masterplan with the same approach. We designed a dynamic system of platforms containing a diffused floating garden and a series of different spaces. The experience of the arrival melts into a dense green environment and a sequence of different tiny floating islands surrounded by water that hosts several different functions that we were able to plug, unplug and eventually relocate accordingly with the client desires. Clearly, a new wave of design on water has finally arrived.