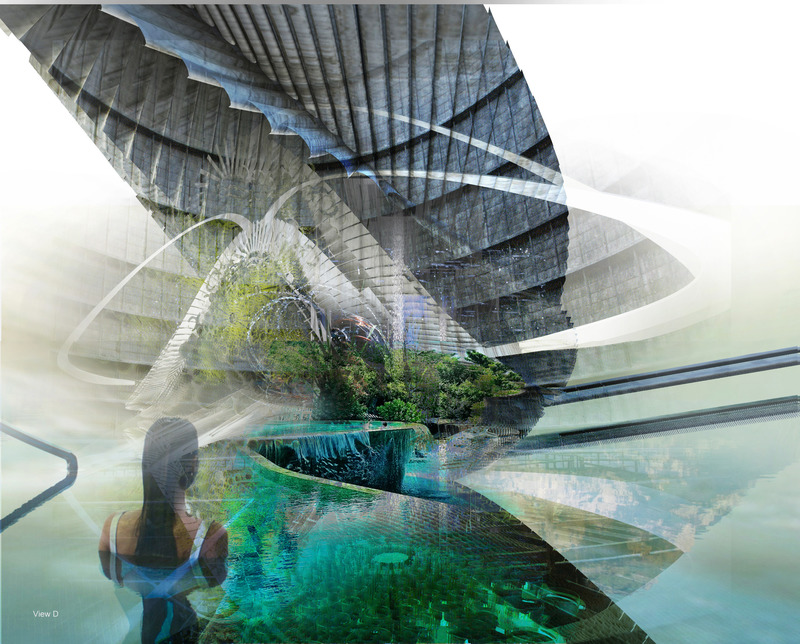 The present design is for a water irrigation reservoir and spa located in the Ilam district, Eastern Nepal, a large agricultural area home to many tea plantations and stunning landscapes.

The brief given to Margot Krasojević Architects required the outdoor spa and wellness platform and water irrigation plant to reflect the nature of its environment. As Nepal, located at a subtropical latitude is known to host different climates at different altitudes, with areas of high humidity which leads to fog formation, as is the case with the Ilam district. There are also many hydrotherapy health retreats in this area. These factors further defined the brief which resulted in proposing a fog net water harnessing structure to conserve the natural environment. This was to be realised through design, program, spatial planning, and architecture.

The project located in Eastern Nepal will be able to produce 3–5 thousand litres of filtered water a day on average.

The water distribution network consists of solar pumps, pipes, valves, and a node-set of reservoirs and pipe intersections. This network connects the suspended polypropylene fog nets to the filters, reservoir, and pools. A dense cross-section of fog nets are draped over a series of cradles embedded into the site’s ledge, its centre of gravity wedged into the site’s rock substrate. Striated canopies stretch over the nets and pipes integrating habitable space with industrial engineered building elements that harness water from fog. The scheme incorporates a water distribution plant.

The practice of collecting condensation or dew is an ancient tradition, for example, plant stems such as stipagrostis sabulicola catch droplets of moisture which are collected each day, this is still exercised by survivalists and currently used in natural irrigation in the Namib desert.

The fog water collector spa has three main parts: the building frame, a cradle embedded within the landscape supporting the suspended fog nets (the Polypropylene net infrastructure has differing densities along the section of the building mimicking the ground level changes by vertically extruding the landscape beneath it), and the basins which collect the filtered fog water. They together form the spa pool and larger reservoir for irrigation and supply of drinking water. 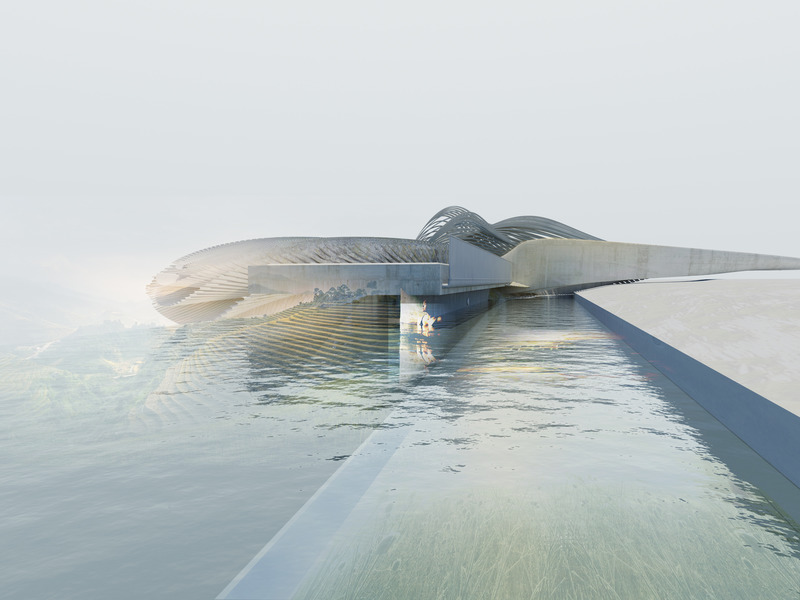 The fog nets are woven using a Raschel mesh. This weave captures most water droplets depending on the wind direction, as the nets are erected on ridgelines to interrupt moving fog carried by the wind to have the maximum efficiency. Fog, composed of millions of droplets of water, is obstructed by the mesh and trickles down into the collection trough, funnelled through the pipe network to be stored in the spa and field irrigation pools.

The fog nets are cleaned to remove toxic mold and micro-organisms using an electrical current to loosen and dislodge airborne contaminants such as birds, dust, and other pollutants. Another concern was determining the location of the project to provide optimum conditions for a better harvest. As yields are affected by global as well as local weather fluctuations, it was important to work within a site with maximum efficient output.

The nets are hung in sections to allow adaptation and rebuilding on other sites, making it easier to accommodate the landscapes natural contours. The scheme wraps itself around the pools and reservoir, designed to allow water to flow through filters and sections before it can fill the spa and irrigation pools for tea plantations.

The striated structural frame lends itself to the site, terracing itself into its surrounding, using the nature and technique of water irrigation as a method of channelling water through the scheme into the cantilevered pools that surround the site.

The building is cantilevered from the site’s ledge. The centre of the nets’ gravity hovers, partly supported by the pool beneath it as inflatable elements are intertwined within its sections.

Whilst the bulk of the scheme is cradled, pivoting in the direction of the wind to achieve an efficient water harvest, the rest sways slightly for the condensation to drip down the net surface and into the troughs and water pipe network, which collect the harvested fog water. The fog water is collected by three pools, one inside the scheme anchors it to the site, whilst the other two supply the spa, field irrigation, and drinking water pumps.

Harnessed fog water is collected in troughs, which lead to increasing pressure within spa chamber. This, along with the solar pumps, pushes fog water through the water pipe network. The water flows through the filters and the entire scheme, finally collecting in the spa pool and water irrigation reservoir.