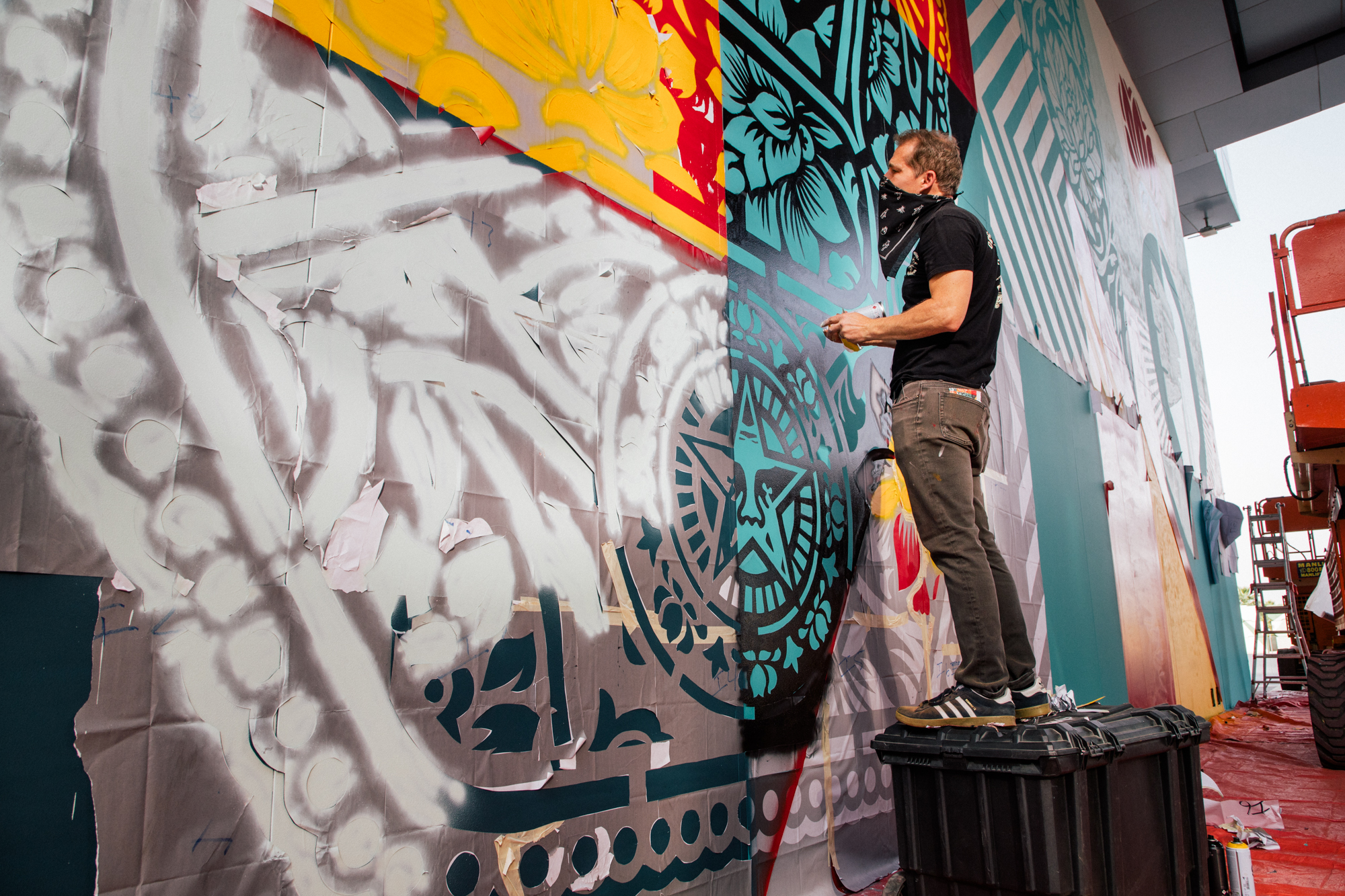 Contemporary US street artist Shepard Fairey, who designed the iconic ‘Hope’ poster of Barak Obama in 2008, has unveiled a new mural in Dubai Design District (d3). Marking his first-ever exhibition in the Middle East, the urban artist collaborated with d3, the region’s largest creative district, to create a striking public artwork that pays homage to Dubai’s vision for cross-cultural communication and cooperation.

Encompassing motifs from his ‘Future Mosaic’ exhibit, there are two murals that can be found between Building 10 and 11 in d3. The first mural, Rise Above Peace Fingers, features an intricately patterned peace sign, featured in the exbibit, layered with another image of a fist holding a flower that doubles as a paintbrush. Keen bystanders can also note the text ‘Rise Above’ with two arrows on the mural.

The second mural, Rise Above Dove, features two images, one of which is directly lifted from the Future Mosaic exhibit. All the murals have been created using bright tones of red, blue and yellow juxtaposed with black and white in Shepard’s signature style. Each mural conveys the universal message of peace,  harmony and co-existence.

Shepard Fairey said: “Dubai and the US have more in common than many people realise. As well as promoting vibrant creative industries, they both promote justice, peace and tolerance. I was so excited to explore these important values and am grateful that Opera Gallery Dubai and d3 gave me the opportunity to create a piece of work that reflects and honours our similarities rather than polarising our differences. I cannot think of a more suitable place for my first regional mural than right here in d3.”

Khadija Al Bastaki, Executive Director of d3, said: “We are delighted that a world-renowned artist such as Shepard has found inspiration in Dubai’s rich cultural heritage and diversity. When he reached out to explore the possibility of creating something here, we were excited because public art is intrinsically linked to our unique identity. It breathes life into our business district, promotes curiosity and engagement, and brings people together to strike up new conversations. As a place that rethinks the regular and challenges creative minds, we are proud that Shepard has chosen d3 as the first place in the region to design a new mural. As part of the UAE’s vision to create a knowledge-based economy, we have seen tremendous growth in the creative industries and this new mural further affirms Dubai’s position as a global destination for creative design.”