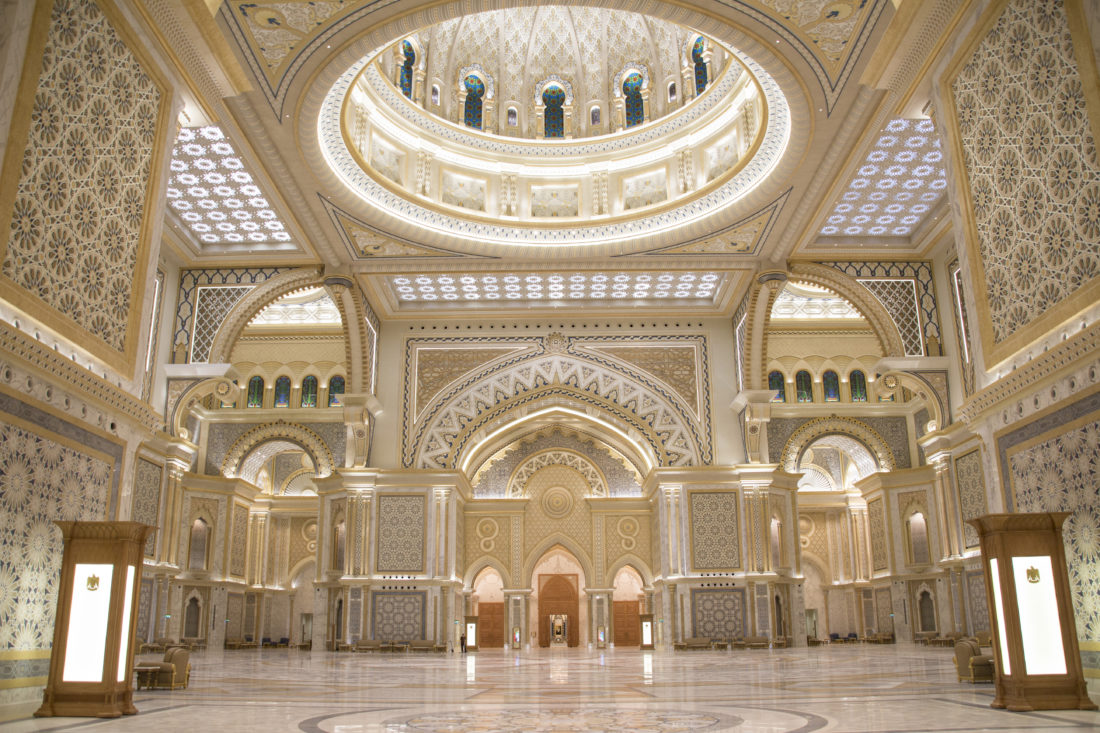 Make some changes in the itinerary if you’re planning to visit UAE, as there is the newest landmark that is grabbing all the attention— Qasr Al Watan in Abu Dhabi is a tribute to Arabian culture, heritage, and artistry. In conversation with the French interior designer Xavier Cartron, the man behind the breathtaking and immaculate design of the wonder of the modern era

There’s something spectacular about UAE, after giving monumental buildings such as Burj Khalifa, Burj Al Arab, The Sheikh Zayed Grand Mosque, Louvre Abu Dhabi, and many others, there’s a new landmark, which the world is talking about. Recently, the travel and tourism website, www. hotelandrest.com, has chosen Abu Dhabi’s Qasr Al Watan as one of the 20 greatest contemporary culture and arts landmark in the world. Out of this world, it just seems as if it’s unreal but it’s there in real, and brimming with pride. Translated as the Palace of the Nation, Qasr Al Watan showcases the cultural and historical heritage in a new civilised style. So, what is Qasr Al Watan? According to its official website: “Qasr Al Watan is more than a palace, it is a unique testament to the spirit The unbelievable grandeur! of the United Arab Emirate’s people and its leaders. The palace invites the world to share our culture, knowledge and inspiring journey. Qasr Al Watan is more than just a palace, it is an enriching interactive journey in a contemporary setting that reveals and reflects on governance, knowledge, and craftsmanship.” 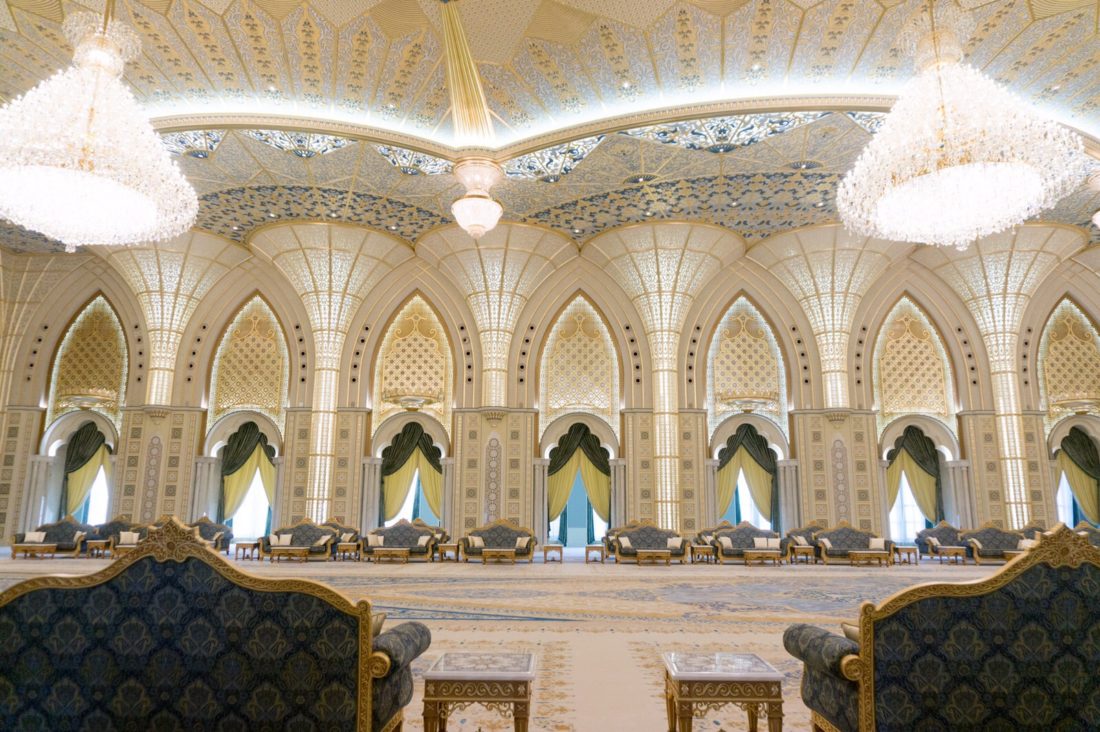 Set amidst the 380,000sqm Presidential Palace compound, it took 150 million hours of work to build the exquisite palace. Solid maple wood with hand-carved designs detailed with 23-carat gold, has been chosen for the doors due to their light in colour and durability. The patterns have been carved by hand and each door took 350-man hours to make. The interior design work for this project was divided into five main packages and other ancillary packages. Apart from The Great Hall, designer Xavier Cartron’s scope of work also included the main reception building, supreme council, presidential library as well as the presidential wing. Cartron is a happy man and the world is showering so much love for the work he has done on this commission. This project is not the first project in the region for Cartron. In fact, he has many achievements all over GCC, especially in Saudi Arabia. Cartron is ecstatic the way people from all over the world are appreciating this architectural wonder. Qasr Al Watan is also nicknamed as the ‘Versailles of the Middle East’. The adventure for Cartron began 10 years ago in 2009 with a contest. His mind-blowing ideas, creative mind, and French know-how captivated the jury and he won the contest to work on this palace. Cartron gushes: “Qasr Al Watan is a unique project without something equivalent in the region. It was clearly, one of the most challenging projects as well. One of the main challenges was to understand the scale and proportions. For example, the main lobby is one hectare and the highest point is 60m. We decorated 2300 rooms. Another thing to keep in mind was the nature of the project, this governmental building is the official reception and conference building of the country, has the Supreme Council Hall, as well as the Offices for H.H. the President, H.H. the Vice- President, H.H. the Crown Prince, and top state officials. All this required special studying.” Cartron has taken cues from the rich Arab culture and heritage to create something as magnificent as this.

Cartron comments: “The design showcases a strong Emirati identity by the way of overall harmony of colours, like a shade of ivory, beige (reminiscent of the sandy beaches of the Persian golf course), of ochre yellow (inspired by the desert of the peninsula), and finally different shades of blue initiated by the turquoise waters of Abu Dhabi. Not just this, but also, in the use of ornaments inspired by the whole culture of the Arab world, these arabesques are the visual expression of decoration. This design was based on classical proportions structuring the overall proportions of the project.” The Palace of the Nation opened its door for the general public in March 2019, and it has become a monumental landmark for the country. Designing such a big project was not an easy task, but Cartron knew what the client wanted. For Cartron, client’s brief holds utmost importance. He shares: “I am passionate about my work whatever the project, any style, any scale. I don’t care about my signature, on the contrary, I like variety. I do not try to adapt the projects to my design; I prefer to adapt my design to the project. Listening and understanding the scope of the client is the key to my success and is one of the reasons for the plurality of our projects. I take inspiration from the relationship I have with my clients. It is essential to understand their request to start working.” 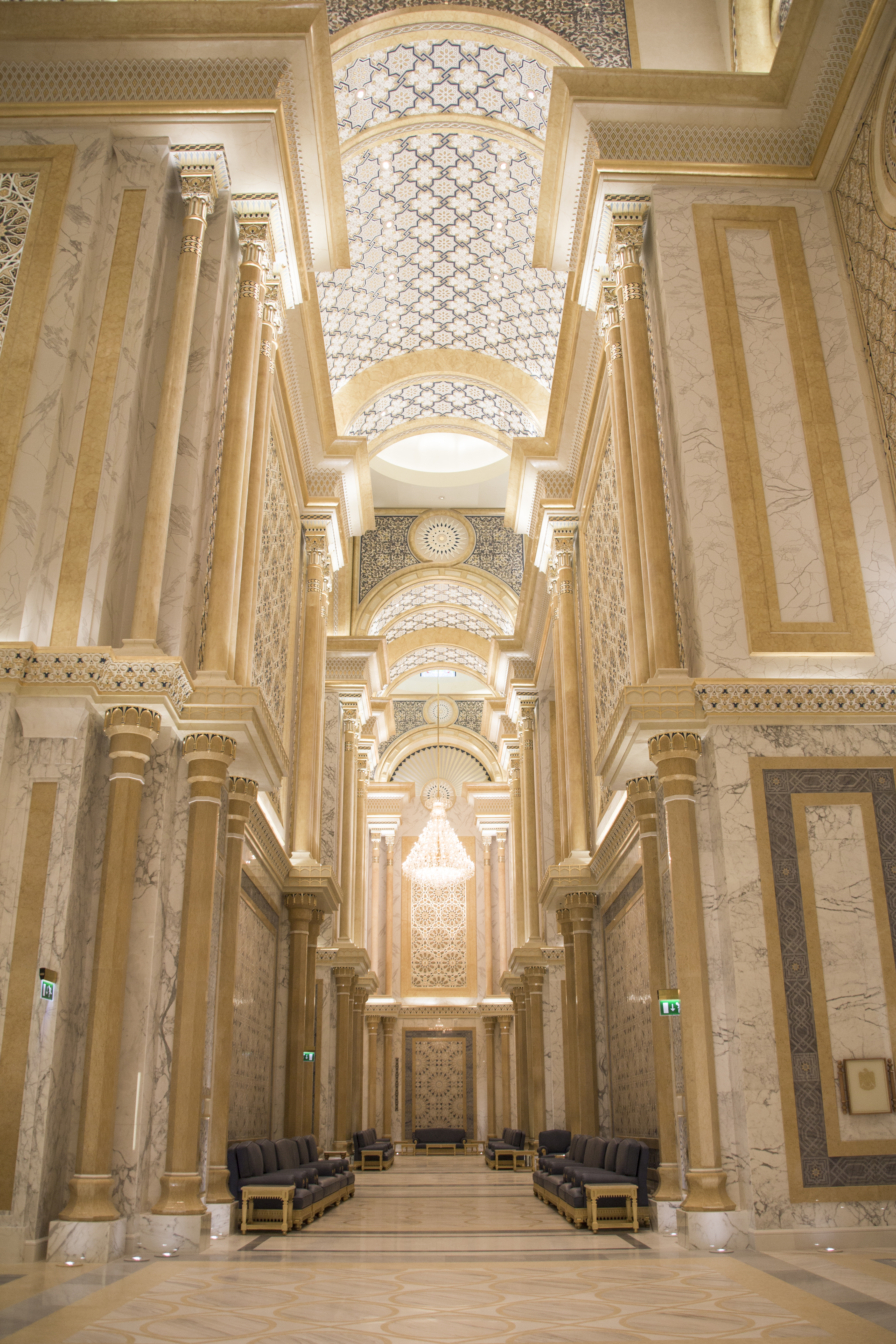 The Presidential Palace Abu Dhabi is divided into various zones like The Great Hall, which features central dome, archways, and stunning mosaic patterns. The most arresting feature of The Great Hall is its central dome, standing 60m above the ground and boasting a diameter of 37m, this meticulously crafted dome is one of the largest in the world, and a true marvel to behold. Cartron worked closely with Mirodec Gulf to achieve the glorious look of central dome featuring stained glass panels and decorative glass panels. Another zone called the Spirit of Collaboration, which is a meeting area where entities such as the Federal Supreme Council, the Arab League and the Gulf Cooperation Council come together to express ambitions, set agendas, and map the way forward.

One of the highlights here is the chandelier. Designed to absorb ambient sounds in the room, this magnificent fixture comprises 350,000 crystals. Weighing an impressive 12 tonnes, this three-layered chandelier had to be assembled within the room due to its massive proportions. Qasr Al Watan also features Presidential Gifts Exhibition and Presidential Banquet Hall. The Presidential Banquet boasts an impressive 149,000 assortment of crystal, bone china and silverware that has been custom-made for Qasr Al Watan. Qasr Al Watan Library is aimed at preserving and sharing centuries of Arabian knowledge and culture with the world. It features a collection of 50,000 books from various ages of Arabian scholarship, this library is an expansive space where history and knowledge help inspire and mold the future. 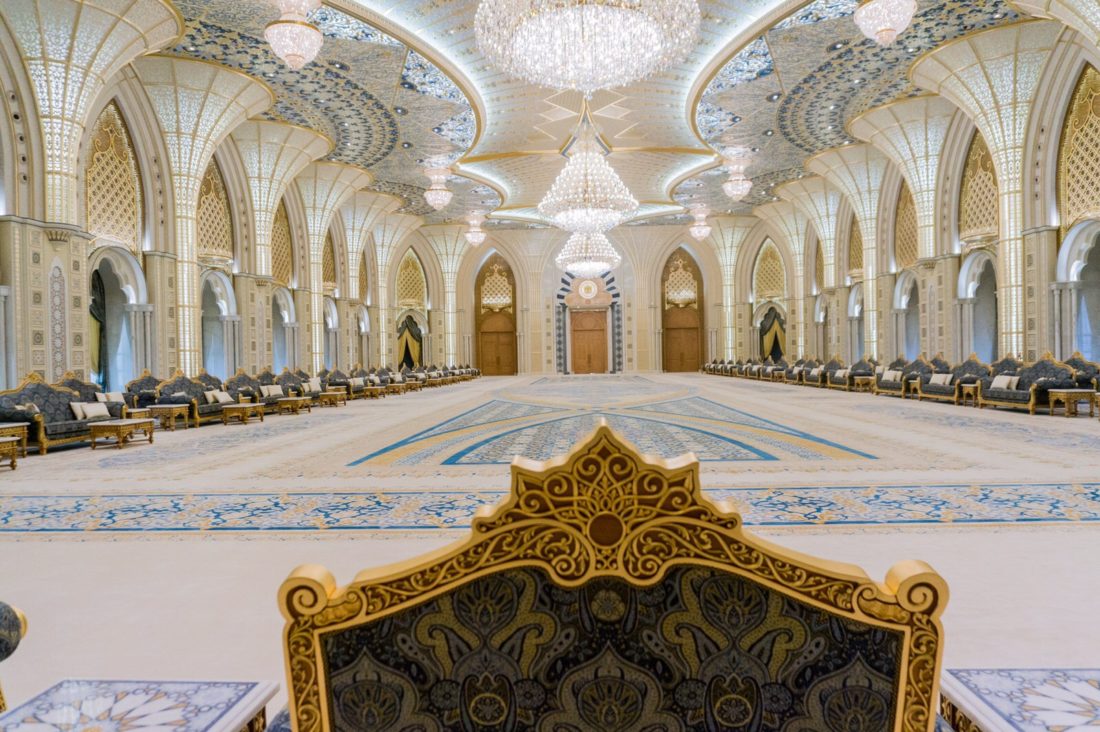 There are other huge attractions at the palace as well and various dining options available for the visitors. Cartron is in awe of the Middle East, its fascinating culture, and the wonderful buildings in this land of the desert. He is studying other projects, but not like Qsar Al Watan. “We are working on a hotel resort in the Sultanate of The Central Dome Oman, also private villas in Kuwait and Saudi Arabia (architecture and decoration). Now, Dubai is a very important place for the design (interior design and architecture). There are many iconic projects that I personally like the Louvre Museum in Abu Dhabi which was built by Jean Nouvel that is associating modernity in a local architectural tradition, its approach is timeless.” Cartron is focussing on creating architecture that is responsible and sustainable. He is a fearless and a creative designer who works towards his passion and not mere trends. “Our interior and exterior architecture must be responsible. We are currently working on positive energy buildings. I do not believe in trends; I think that design has to go back to its sources: an honest and natural conceptual approach, respect for the environment, an awareness of the sustainability of projects and cultural knowledge of its use is highly important. This is my vision for my career that I wish will not be registered as ephemeral,” Cartron signs off. 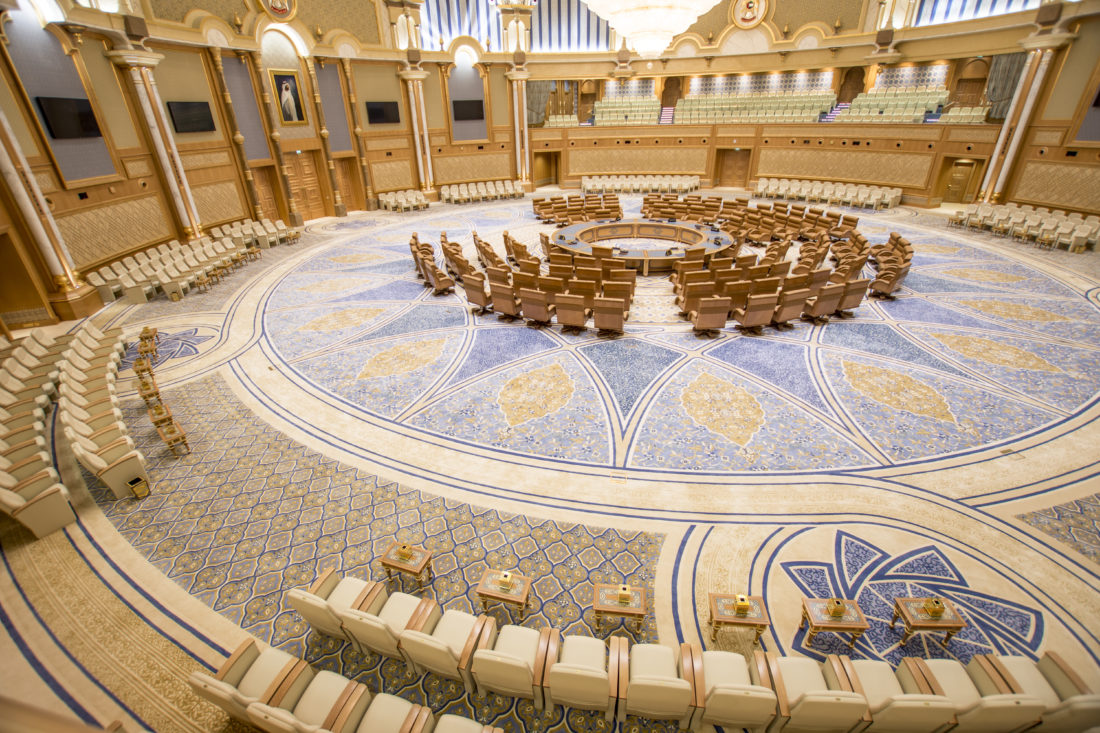