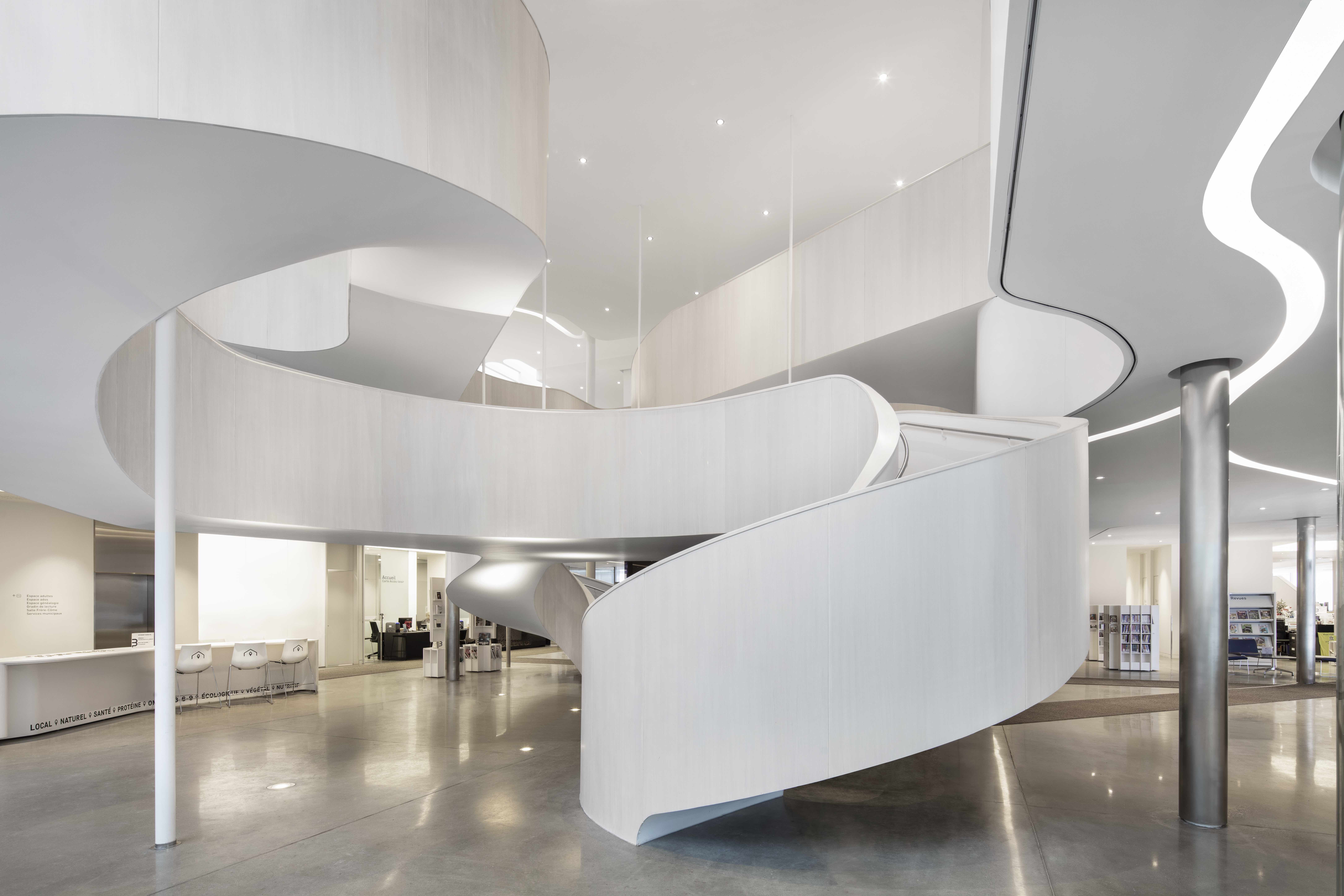 Originating from an architectural competition, the Drummondville Library project in Canada transposes the historical, cultural and poetic essence of the region into a studied urban and architectural composition. Since the city was founded by a garrison of soldiers-turned-farmers 200 years ago, the Saint-François River has been the main protagonist in the historical and cultural tale of Drummondville and the central Quebec region.

Crossed by a railway a few years later and exploited by a series of hydro-electric dams, the Saint-François River enabled the city to develop its main economic drivers: industry and turbines. Following a difficult period, Drummondville is now embracing the future thanks to its intensive efforts in economic development, welcoming the new library as the culmination of these efforts and a as dynamic civic space in the heart of the city centre.

A civic space that fills the site

The firm Chevalier Morales Architectes desired to work with the entire site; they considered the library building from a broader perspective, as a civic facility part of a large integrated civic complex within a park. The main objective was to use this project as a catalyst to reverse the growing isolation the site was facing as it was becoming cut off from Lindsay Street, the main commercial and human-scale avenue of the city. To address this problem, they engaged a dialogue between the other project on the site: the skating rink, as well as the various components of the library.

Physically, the project positions itself on the site in relation to the power line, positioning itself on either side of the easement. Using the axis of the power line as a mirror, the main library building sits along the easement line to the east, linked to Des Forges Street, while the skating rink and its accessory building are on the west side. This strategy creates the impression of a single larger project, reaching Lindsay Street with a linear walkway along a garden – the Jardin des Voltigeurs – and creating a public space on the street, which can be used for seasonal events. 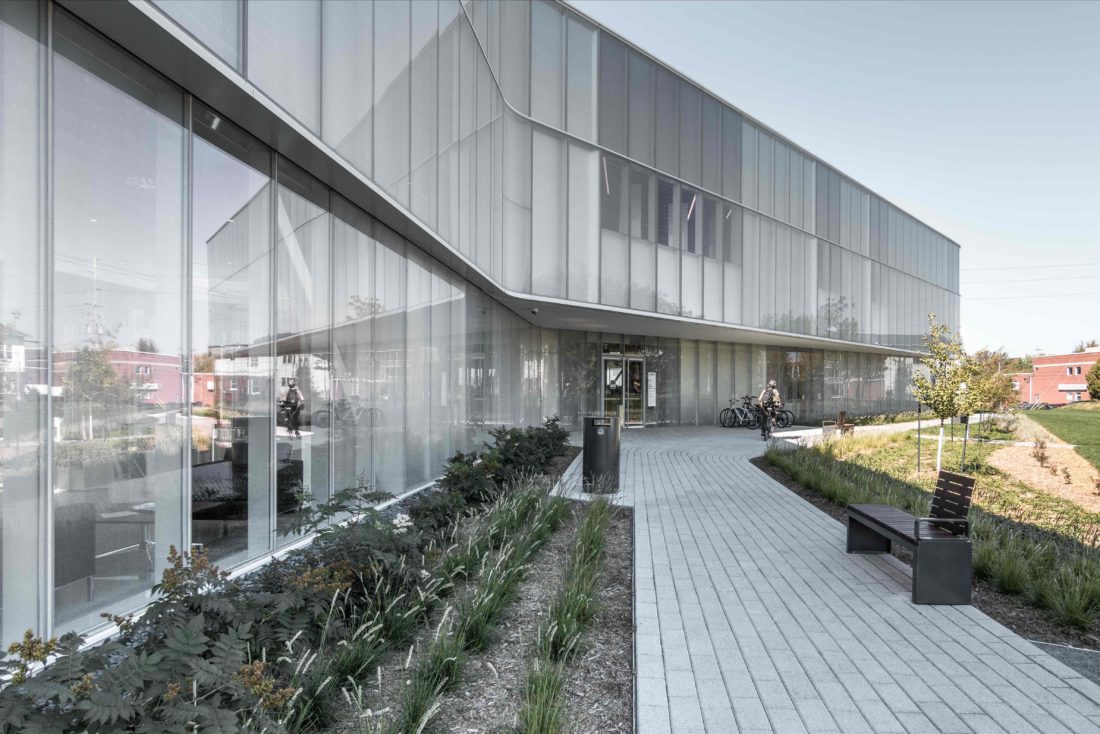 By locating most of the parking to the south alongside the big box retailers, which also creates a visual and sound barrier, all the project’s components fall into their appropriate place. This organisational structure of the site both grounds the library and allows the municipality to gradually increase programming to reflect the seasons and the municipality’s sports and cultural development priorities. The site will vibrate to the rhythm of festivals, day camps, hockey games or even host Christmas markets.

While developing the project, the architects were also attentive to the lighting of the site, including elements such as an electric meadow in the Jardin des Voltigeurs, a series of light points along the power line and the walkway, and by installing illuminated soffits under the building’s overhang. This electrical park is a tribute to one of the important aspects of Drummondville’s history: electricity.

Organisation of the library

The layout of the library and other programming elements, such as the Drummondville Historic Society and the Arts and Culture and Immigration Department is untraditional. From the outset the architects decided that people should be able to enter the site freely, as one would a shopping centre or a train station; a café was therefore placed at its centre with tables positioned to take in attractive vantage points or offer privacy.

Alongside the required secondary entrances, two main entrances were created, one opening onto the parking lot and the other opening onto the park on the Des Forges Street side, which can be reached through the linear walkway and the Jardin des Voltigeurs. The building can remain open outside library hours by closing the entrance opening onto Des Forges Street, sealing off the north staircase and closing technical services to the south. This approach leaves only the circulation counter in the central space accessible, which has a minimal impact on the space due to its discrete hotel lobby counter design, which equally encourages the use of the automated circulation services.

This enables the multi-functional room to be alive both in the evening as a space for theatre or during the day as a multi-purpose space. Equipped with dressing rooms and a control room, the multi-functional room is equipped with a stage that can open onto the inner courtyard when the curtains are drawn. This room, located in the centre of the library near the main staircase, can accommodate a hundred people and has complete scenographic and multimedia equipment for the performance of shows, training, municipal events.

At the centre of the space, within an impressive double-height space, unfolds the vertical circulation: a grand sculptural staircase composed of two off-centred helical stairs, opening several vantage points onto the library, the exhibition areas and the garden adjacent to the periodical reading room. The large intermediate landing of this staircase serves a dual purpose: it can be used to showcase collections or objects on display and gives visitors a place to pause or change direction, reinforcing the idea of free circulation.

The two gardens remain present on the second floor and help define the level’s two main areas: fiction and non-fiction for adults, the latter also leading to the terrace located to the south. Between these two areas on the south side of the library is an electronic library and an area for teens, both adjacent to the bleachers. These create both a space for families, bridging the children and adult areas, and a unique space that offers views of the skating rink and winter sports, or, in summer, views of an area where a wide range of activities can take place.

The design of the building envelope stems from several considerations. First, the architects created a high-performance envelope in terms of sustainable development, appropriate for a library while ensuring a certain uniformity. Translucent glass panels cover a stainless-steel envelope, ceramic glass panels control solar gain and transparent panels offer directed views of the site and provide natural light for the work, relaxation and reading spaces.

Secondly, a unique specificity was given to the envelope by embedding physical traces of Drummondville within the thickness of the envelope. The architects drew inspiration from the iron slag; the blue-tinted residue is a reminder of the first heavy industry in Drummondville, large quantities of which were produced and likely the foundations of several local streets. The milky appearance of this industrial by-product can also be associated to the whiteness of ice. At certain moments in the envelope, the use of perforated steel creates a bluish watermark behind the ceramic or translucent glass, a reminder of the iron slag. Combined with the warmth of the worked wood in the staircase and the wooden floor on the second floor, the blue tint gives the envelope a unique dimension.

The sustainable development vision of the Drummondville library remains, still today, prospective and evolving. The current technical knowledge simplifies the answers to the immediate imperatives of cost and increasing the comfort within the space. The basic electromechanical concept is based on flexibility, ensuring the current equipment can adapt in the future to the evolution of knowledge and technologies. In the meantime, a heat exchange system between the rink and the library optimises the financial, energy and environmental resources of the community.

These two complementary uses, which require opposing hot and cold requirements, allow loop energy transfer for nearly six months of the year, reducing the scale of energy systems and energy demands. Without compromising performance improvements in the future, today’s technical capabilities exploit the integration of collective resources to ensure an exemplary and sustainable development of the financial and environmental resources of the Drummondville Library project. 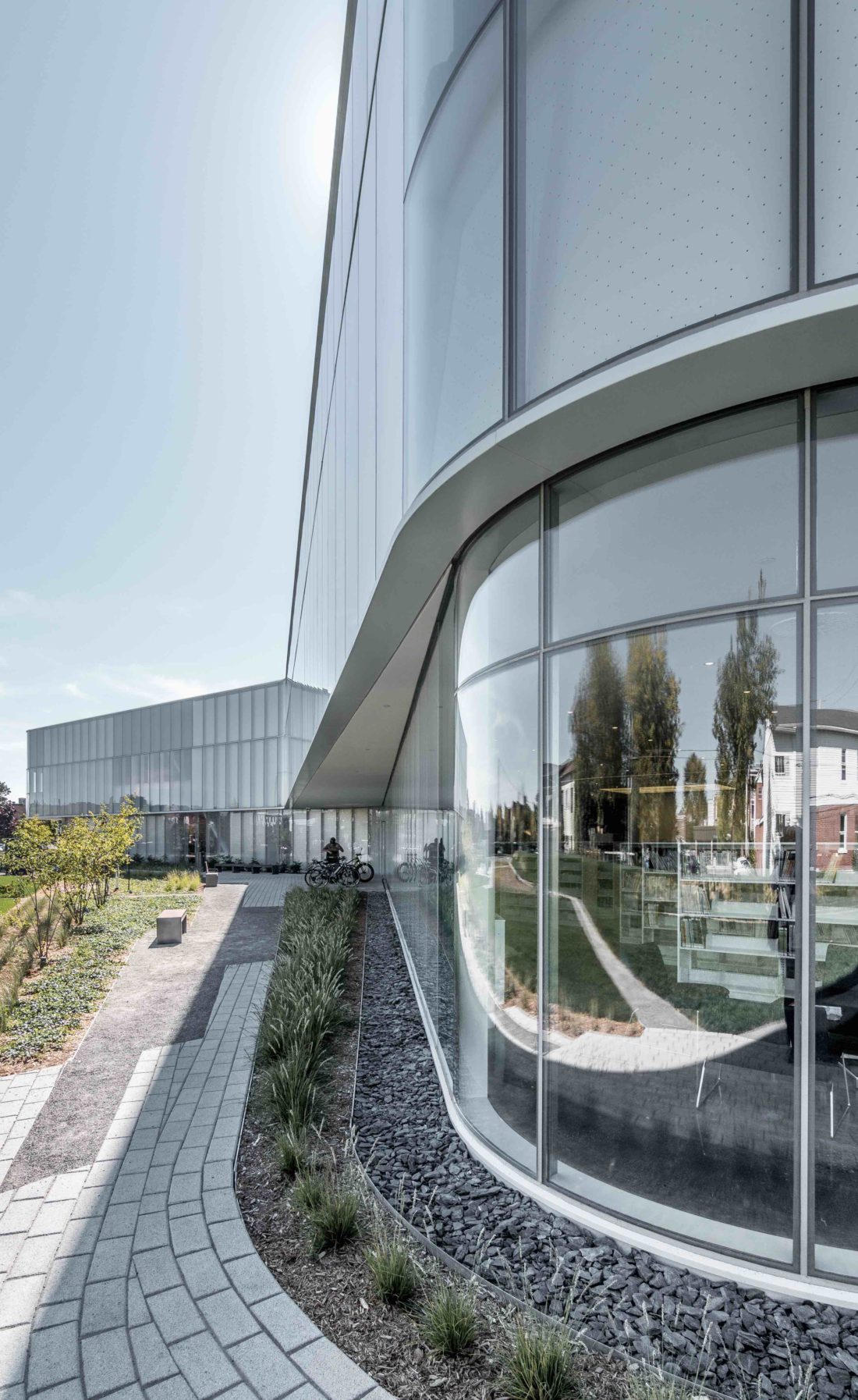