Popular in Victorian times, terrariums are back – thanks to a green-fingered entrepreneur who’s reworked these miniature landscapes for the modern age

A passion for interior design inspired a Dubai florist to revisit an age-old art. Cheryl Ann Cox is the owner of Moss + Myrtle, a boutique lifestyle firm whose bespoke terrariums have a distinctive 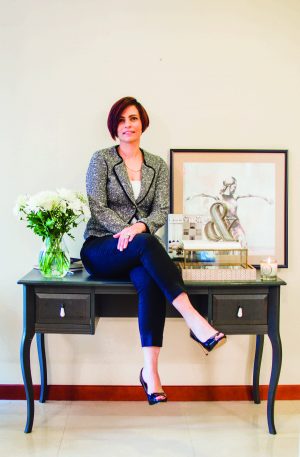 modern touch.“The original concept of a terrarium is an enclosed miniature garden and in the old days they would be completely closed, so you wouldn’t really have to water them at all,” she says.

“As living organisms, plants exhibit warmth, so even if there’s an opening you’ll find condensation on the top of the glass. When it’s completely enclosed, that condensation rises to the top, reaches the glass and with the difference in temperature it condenses and drops back in, as though it’s raining inside.”

Cox is no stranger to arid climates. The Australian national, who was raised in Dubai, studied floristry at the Floral Art School of Australia. Fifteen years on, she’s designed plant habitats for corporate and residential interiors, as well as designing floral arrangements for weddings. She spent a year learning about terrariums and was encouraged by the positive response to
her work.

“I started giving them as gifts to my friends, who really received them well – they encouraged me to produce them on a bigger scale, as did as my children. So that planted some seeds! “Also, my son Nicholas, who owns a landscaping and irrigation company, has been talking about doing terrariums for a while. That, along with the encouragement from friends, made me think: ‘Why not?’”

Cox’s boutique lifestyle brand Moss + Myrtle started trading two years ago as a subsidiary of her son’s 25-year-old garden design and build firm, Fleur. “We launched just before Valentine’s Day – it was just a coincidence, really – and I had such a good response!,” she says. “So it’s just grown steadily from there.” While most commissions come from private individuals, Moss + Myrtle is reaching out to corporate clients. It’s recently produced bespoke pieces for the premises of fertility clinic Conceive and PR firm Spread Communications, both based in Dubai.

Moss + Myrtle specialises in adding a personal touch, tailoring pieces for special events, to reflect the recipient’s personality or reflect the ethos of a brand. While a few other UAE firms can supplyterrariums, she believes Moss + Myrtle’s ability to customise its products sets it apart from the competition.

“With Spread we customised it completely to make it unique,” she says. “It was just a round bowl, but it had a little coffee cup and a newspaper on the table.” 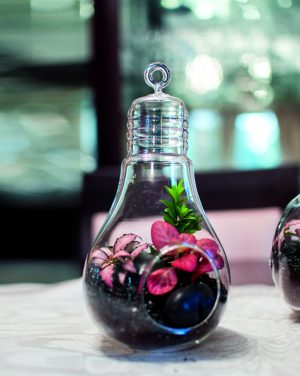 She adds: “The corporate clients wanted a particular style and for each terrarium to be the same, but, you couldn’t put two side by side and say they were exactly alike, just because of the colour of the plants and the way they were shaped. “Every one of them is different and, in a sense, each terrarium is unique anyway. Every plant is shaped differently. Obviously, when you’re placing plants in the vessel you go according to the shape – it’s like any form of design, whether it’s pottery or sculpture. You’re creating as you go along, so in that sense no two terrariums are alike.”

Tender loving care
Terrariums can last for years if looked after properly – if kept in cool, air-conditioned surroundings, they only need watering every 10 days or so. While Moss + Myrtle gives its customers “some pretty clear instructions” on plant care, Cox makes a point of speaking to them beforehand to find out more about where they intend to place them.

“Anyone can bring in their terrarium – even two or three months later – and we will service it for them free of charge,” she adds. “We’re happy to carry out general maintenance such as trimming, although that can easily be done by the owner using a pair of scissors.” Nimble fingers are needed to ensure the plants’ delicate roots aren’t damaged as they’re arranged within its glass container.

“You do have to be careful because a plant is a living organism. Often you need to separate the roots, so it is quite delicate work –I think you’d need to be a gardener or something similar. “If you have that skill I don’t think it’s difficult, but at the same time it’s something I had to learn – I took that year to learn which plants to use and how to handle them. Some roots can’t be separated if you want the plants to live, so you’ve just got to use the whole thing, while others are very hardy and can take that sort of abuse!” 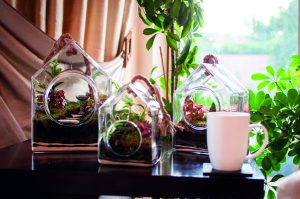 Finding plants that thrive in the UAE’s harsh climate is a challenge in itself. While Moss + Myrtle uses some succulents – plants with thick, fleshy leaves or stems which can store a lot of water – Cox isn’t too keen on cacti, adding: “A cactus terrarium can be lovely, but I just feel it’s not my thing.” Instead, she favours fittonia. “They come in a variety of colours, which is lovely, and some of them have little furry feel to them, so there’s texture also. And they come in a lot of variegated colours.” She adds: “People just love to look into them. It’s like another world.”

A brief history of terrariums –
As early as 500 BC, plants were displayed underneath bell-shaped jars. But the terrarium in its modern form was invented by accident almost two centuries ago. In 1827, Dr Nathaniel Ward, a London medic with a passion for botany, built a fern rockery in his back garden, but the plants kept dying, poisoned by pollution from nearby factories. At the time, he was studying moths and caterpillars and, while experimenting with a cocoon in a covered jar for observation, he noticed that several plants had grown in the soil at the bottom of the jar. Among the them was a fern and, unlike the sorry-looking ones in his garden, it looked healthy; Dr Ward concluded that plants could flourish in London if they could be protected from the smog enveloping the city. Ward put his theory to the test, building miniature greenhouses, now known as Wardian cases or terrariums. The cases enabled horticulturalists to transport tropical species across the sea as they were shielded from salty air and changes in temperature throughout the lengthy voyages. Back in England, the concept caught on among rich and poor alike, spreading to America by the 1860s. These days, terrariums serve a different purpose. The dry atmosphere of air-conditioned buildings can make plant care challenging, and many fail to thrive. Terrariums aren’t only decorative – they provide an environment in which plants need very little care.