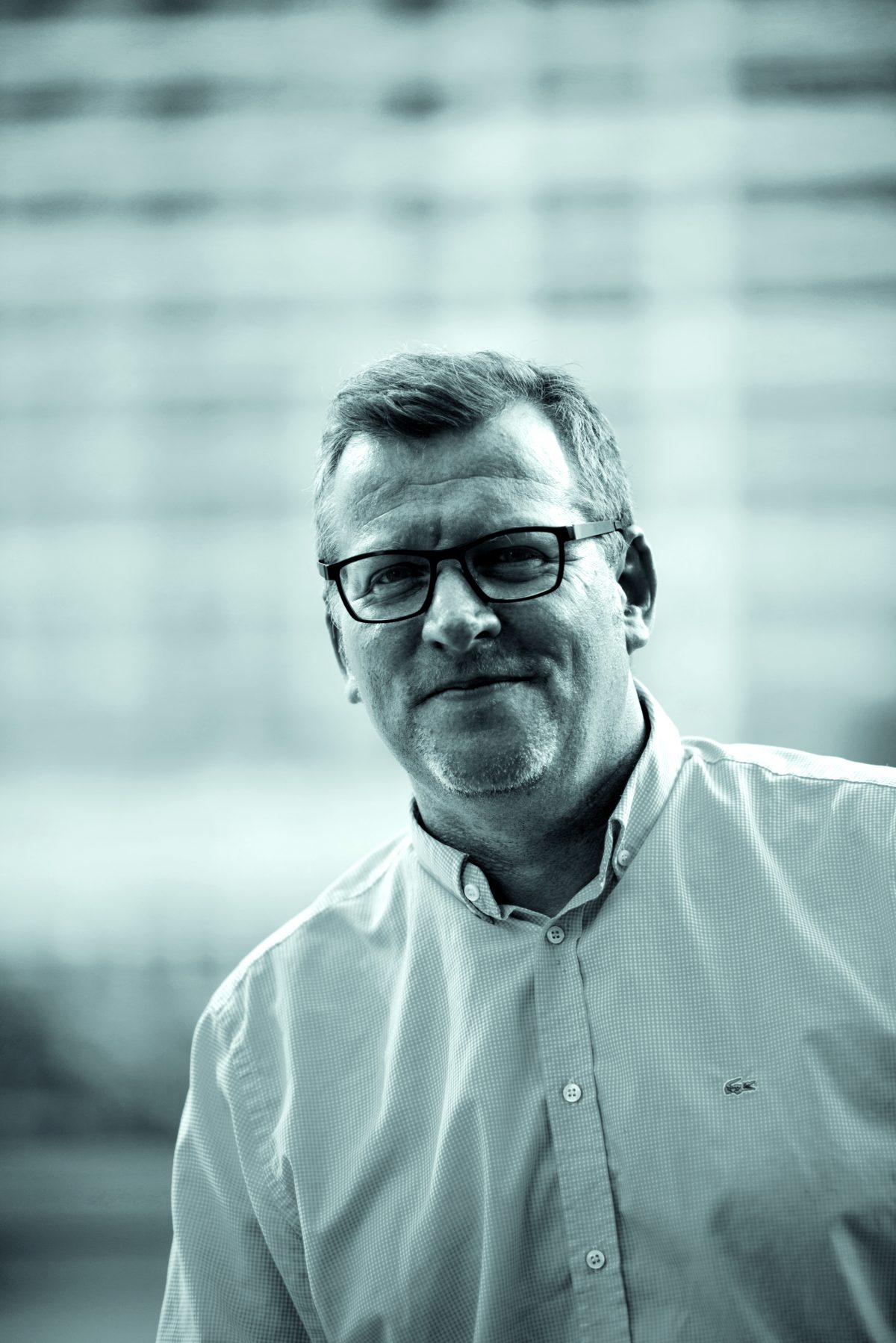 avid Rooney knows a thing or two about restaurants. Interior design practice LXA, of which he’s
creative director and a founding partner, has had a hand in creating some of Dubai’s most distinctive-looking dining destinations, including Asha’s, Chamas and Intersect by Lexus, the Tokyo-born, DIFC-based leisure concept that combines Japanese cars and cuisine. When Design Middle East caught up with him, he’d stopped off in the UAE en route to London from Doha, where a fourth outlet  is set to open this year.

“What is it? Ostensibly it’s there to sell cars, but at the same time the added value is we’re putting a lounge into there, we’re putting a food offer in there. It’s breaking up the barriers and the lines between conventional institutions,” he says. “Of course it’s about the car, but it’s not necessarily about buying one – it’s upscaling the brand. I love that. I love bolting on and adding to established formats and taking them to a completely different lifestyle level.”

To Rooney, Intersect by Lexus typifies the trend towards F&B offerings in hitherto unconventional settings. “I think things are going to get mixed up in a great way,” he says. “For example, we’re looking at bringing boxing gyms into the market that have a food offer, that have lots of added value.

“You’ll see, in the not too distant future, that when a hotel chain decides to introduce a gym it’ll have a food offer, a drink offer – that’ll really mix it up. The lines are going to be blurred, even more than they are now.”

Flavour of the month

Rooney is well versed in the vagaries of Dubai’s fickle dining scene and cites Qbara, JAS Hospitality’s ill-fated Lebanese restaurant, as a cautionary tale. The cavernous space, designed by Tokyo’s Studio Glitt, was remarkable, with a strikingly modern chandelier composed of hundreds of strands of steel wire; suspended ceiling panels and a stunning centrepiece of a carved timber installation off which bounced constantly changing LED projections. Yet the venue closed last summer, less than three years after its launch.

“What an awful story that is,” he laments. “It was an amazing piece of design – and it’s not like us to praise other people’s designs, but it was beautiful. It was outstanding. “The rise and fall of the über-restaurant in Dubai and the Middle East will be real.”

He believes Qbara’s failure has had a chilling impact on regional restaurateurs’ ambitions, dampening enthusiasm for large-scale, big-money schemes.“I think people looked at that and thought ‘Oh gosh, that is a massive investment that’s failed’. Now, things like that, when the market’s robust, have an effect.”

While Rooney thinks there will always be “high-end destination restaurants that are all about a specific cuisine”, he predicts they’ll be scaled down. Instead, smaller, more intimate boutique venues may be on the cards, “quasi private members’ clubs – not by invitation, but you’ll have to reserve your place at the bar.”

Over the past five years there’s been this kind of urban design where everything looks as if it’s been set on fire, put out and then put back into the space

What other F&B trends can he foresee? Smaller venues, for a start, and “a general paring down of design exuberance”.“Over the past five years there’s been this kind of urban design where everything looks as if it’s been set on fire, put out and then put back into the space.”

While that might sound a tad extreme, he can certainly see a shift towards a more sophisticated, scaled down and calmer approach, adding: “I think that will happen because we’re working on things like that.”

Operating in the Middle East is not without problems. One common complaint is unrealistic turnaround times; others include quality assurance and ensuring the firm’s vision for a space is followed through.

“Quite often we have to fight to stay involved,” he says. “There can be a propensity for clients to say ‘Thank you very much, I’ve got the design’ – and we really push back hard.” He adds: “We do like to keep control over the process to ensure the end result is what we want it to be. That is a perennial challenge, but nothing new.”

A recent LXA project in Al Habtoor City is a case in point. “The Rose & Crown is an example of us giving a really strong design concept, with great drawings to back it up, and them not taking enough notice,” he sighs. “It just wasn’t right – the lighting was ignored. Now if you ignore the lighting specification, then your scheme’s finished. I just walked in and the volumes were great, but it’s cold.”

How does that happen? “It’s always cost. So we would specify typically all the light fittings in this space had to be 270k, which is very warm, then somebody comes in who just doesn’t read.“I don’t want to be too cynical, but somebody has looked at the spec and said ‘How much? I bet we can get that cheaper’. And the argument is, ‘Well, it’s a light, and it’s the same beam, the same input’.

“I kind of get it – cost is important – but it makes a massive difference. It’s the single biggest thing, for me, in a scheme, because if you don’t light it properly it’s going to fail.” LXA tries to use lighting consultants whenever possible – Into Lighting worked on Asha’s restaurant in Manchester, for example – but persuading clients that the benefits of doing so outweigh the expense can be tricky.

He says: “It’s easy to walk in to a space and say ‘Your lighting could have been a lot better’, but you can’t flick a switch and say ‘That’s how it could have been better’.“What we try to do is take clients to restaurants and say ‘Look, this is a great lighting scheme’ – we used to take them to Qbara. And what you’re doing then is endorsing their feeling that lighting is always too expensive, because Qbara was phenomenal. But nevertheless, it had brilliant lighting.”

Rooney arrived in Dubai in 2005, three years before the financial crisis sent the city into freefall, but while he admits he and his business partners have “seen some ups and downs”, he brims with confidence about its ability to bounce back from trouble. 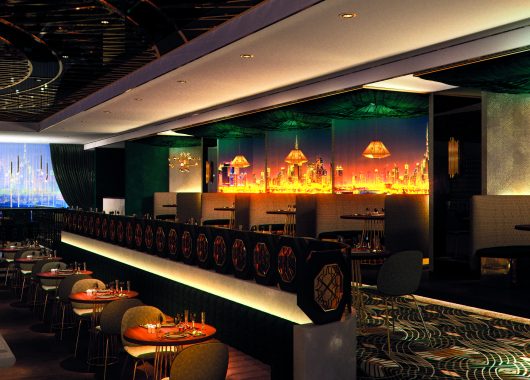 “I’m a great believer that the streets aren’t necessarily paved with gold in Dubai, but conversely, 2008 and 2009 weren’t quite as bad as everybody says,” he asserts. “Don’t get me wrong – it was tough – but it wasn’t the end of the world. There’s an ambition and resilience to this place that dictates that it won’t fail.”The year 2017 will be hectic. There’s entertainment venue

The Music Rooms and more work with Indian restaurant Asha’s – its LXA-designed Manchester branch has just earned a Michelin star. New clients include Jones the Grocer, the Australian delicatessen.“It’s the first time we’ve worked with Jones and it’s brilliant,”

Rooney says. “They are refreshing because they’re an established brand but they’ve got a great vision and want to actively move it forward.”He says he enjoys working with owner-operators as they tend to have teams in place from the outset meaning his team can meet the staff who’ll actually work in the venue, from managers to the mixologist.“With hotels, I’ll do a restaurant scheme and the team will all be there, but by the time it opens they’ll have gone – it really is shifting sands in the Middle East,” he says. “Get the team in at the start and you’ve got half a chance of creating something special.”