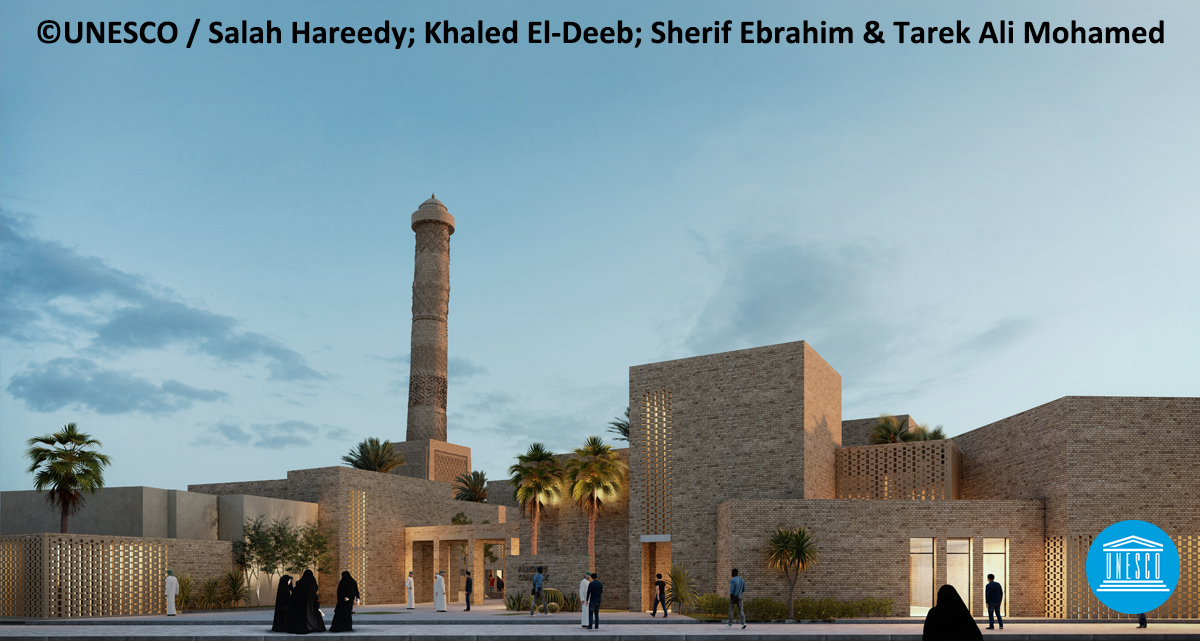 An international jury today announced that an entry by eight Egyptian architects won the international competition for the reconstruction of the historic Al-Nouri Mosque complex in Mosul, Iraq, a major component of UNESCO’s ambitious project for the rehabilitation of the ancient city, Revive the Spirit of Mosul. 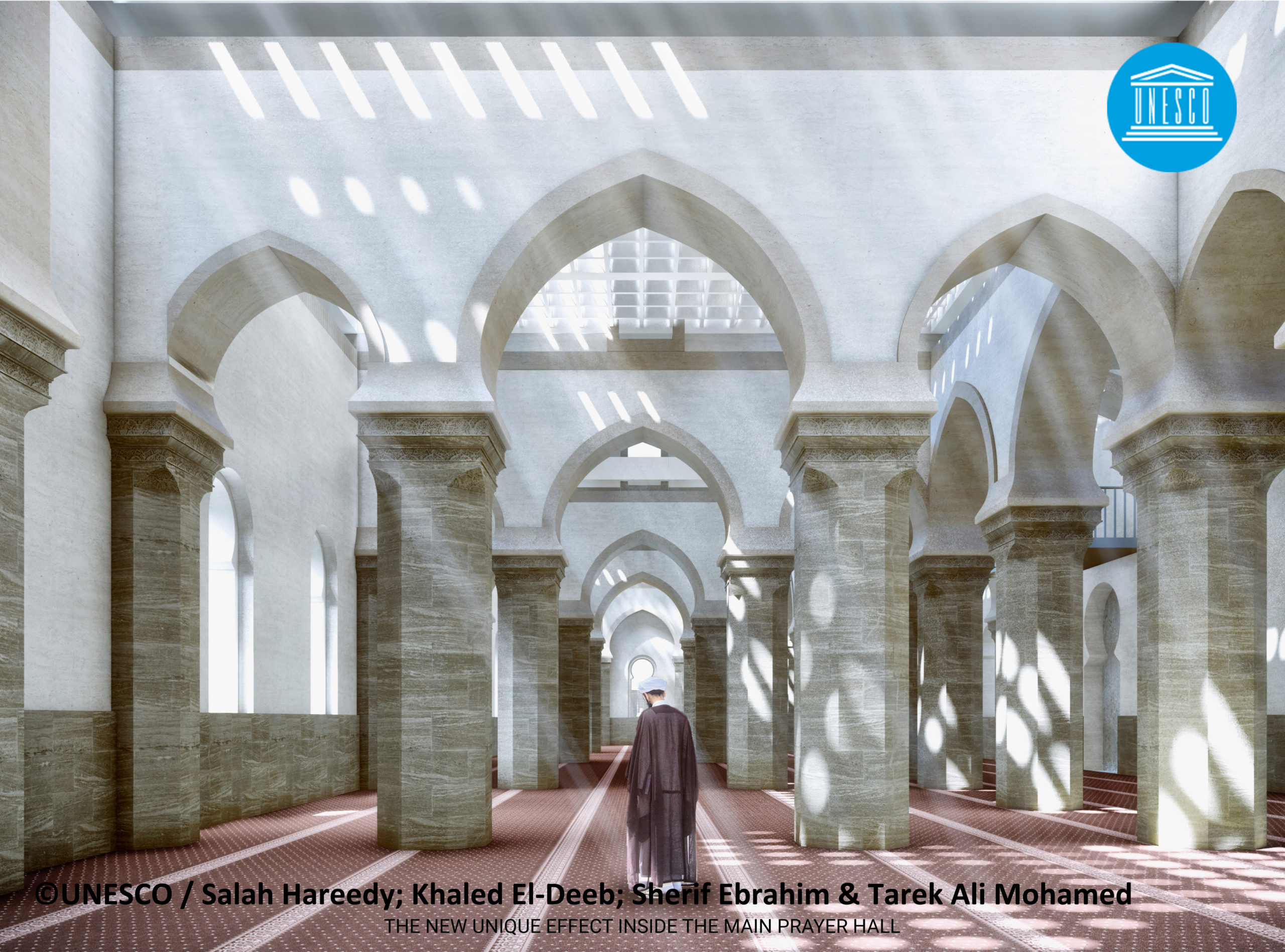 “The reconstruction of Al-Nouri Mosque complex, a historical site that is part of Mosul’s fabric and history, will be a landmark in the process of advancing the war-torn city’s reconciliation and social cohesion. Heritage sites and historical monuments are powerful catalysts for people’s sense of belonging, of community, and identity. They are key to reviving the spirit of Mosul and of Iraq as a whole,” says Audrey Azoulay, UNESCO Director-General.

“The selection of the winning design under the international competition for the reconstruction and rehabilitation of the Al-Nouri Mosque complex is a significant milestone under the ‘Revive the Spirit of Mosul’ initiative. In 2018, the UAE took the lead and joined UNESCO on this historic endeavor, inspired by the history and legacy of Mosul and the resilience and strength of its people. Reaching this important milestone has brought us closer to the realization of a shared commitment to restore social cohesion and a spirit of fraternity and tolerance in Mosul once again,” says Noura bint Mohammed Al Kaabi, United Arab Emirates Minister of Culture and Youth. 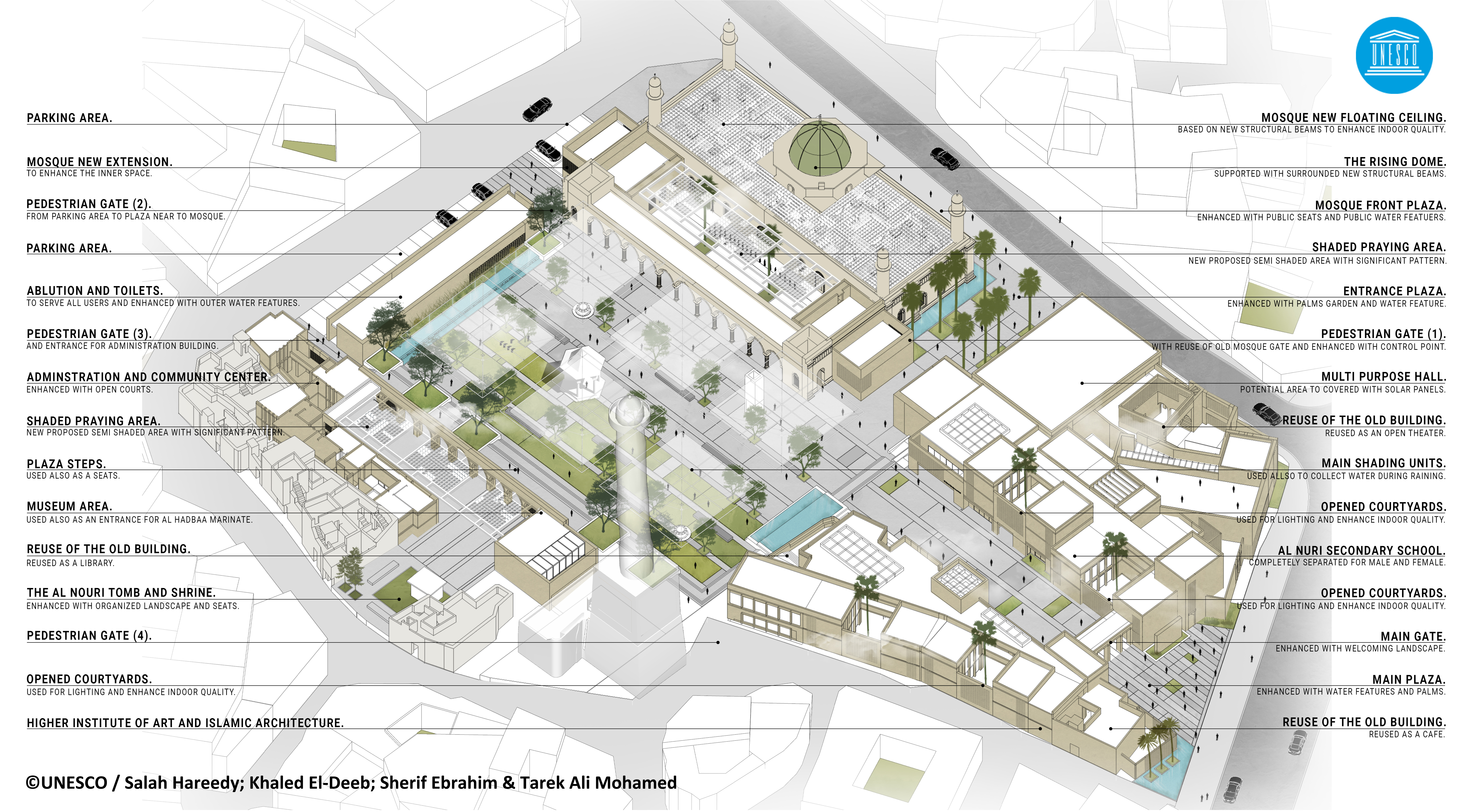 The winners, seasoned architects with a notable track record in heritage rehabilitation, urban planning and climate-based architecture, will now produce a more detailed design for the reconstruction of Al-Nouri complex, with a view to starting its building in late autumn 2021.

The project foresees the reconstruction of Al-Nouri’s historic prayer hall and the organic integration of the complex, the largest public space in the Old City of Mosul, in its urban surrounding through open public spaces with five entry points from surrounding streets.

While the prayer hall will look as it did before the 2017 destruction of Al-Nouri Mosque, it will feature notable improvements in the use of natural light and expanded spaces for women and dignitaries, that will connect to the main hall through a semi covered open structure which could also serve as an open space for prayer.

The winning project further foresees the creation of enclosed gardens evocative of the historic houses and gardens that were located around the prayer hall prior to its remodelling in 1944.Upon notification of their winning, the team issued a statement welcoming the results of the competition saying “Our team worked with high passion to submit a project that primarily addresses the need for social cohesion and revival of souls. We are looking forward to completing the design and to helping the revival of the Old City of Mosul.”

The winning design will receive a $50,000 prize and will be awarded the contract for the detailed design of the complex. The runners-up will be awarded prizes in recognition of their work, $30,000 will be given to a team from India, followed by $20,000 to an entry from Spain, $15,000 to teams from Mexico and Belgium, and $10,000 to a team of architects from the United Arab Emirates and France.

The competition was “endorsed by UIA (International Union of Architects)”. 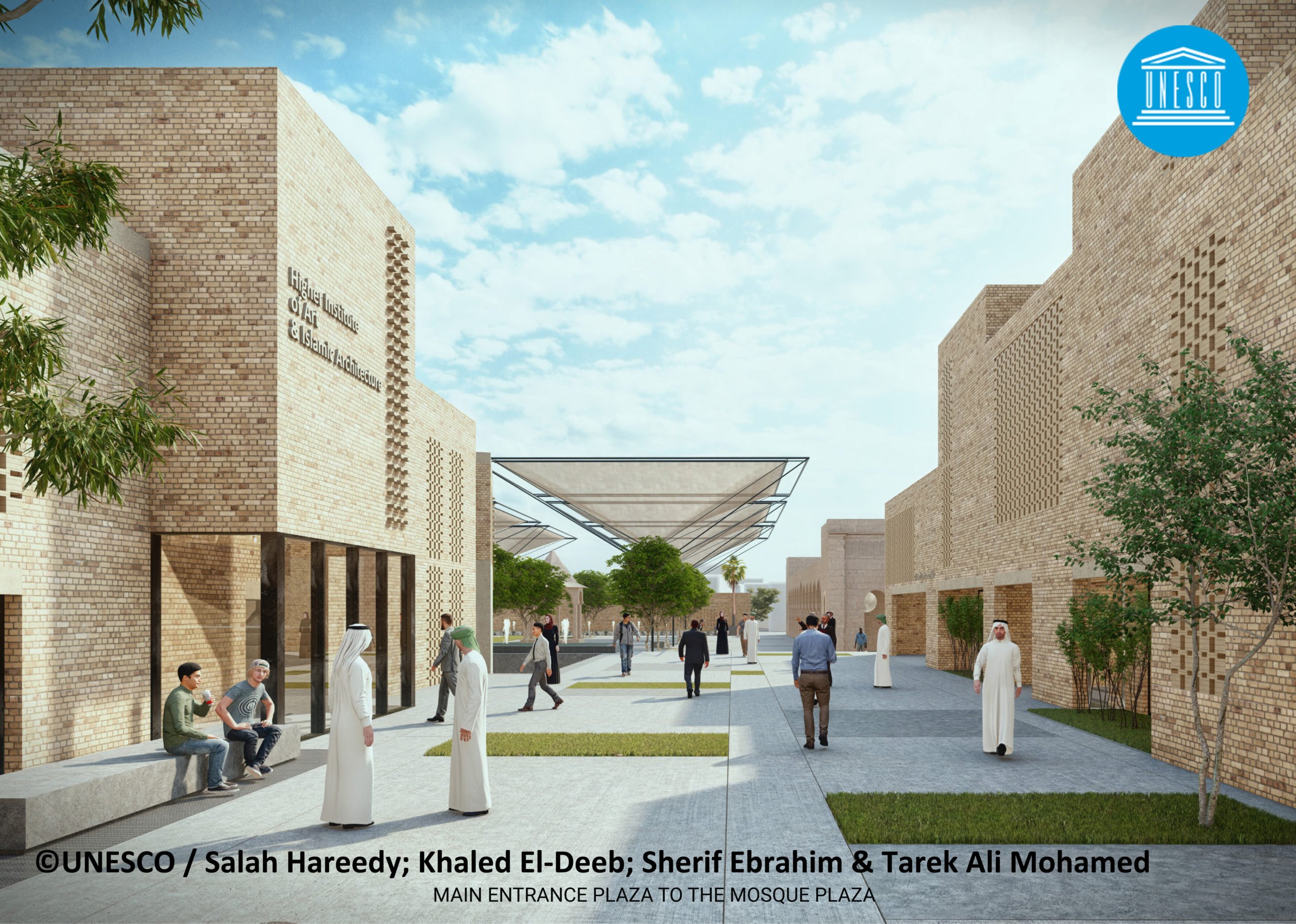 The international design competition for the Reconstruction and Rehabilitation of Al-Nouri complex in Mosul was launched in November 2020 by UNESCO. The competition was prepared in close coordination with the Iraqi Ministry of Culture and the Iraqi Sunni Endowment, with the support of the United Arab Emirates, all of them members of the Joint Steering Committee of the project. This reconstruction of the Al-Nouri Complex is part of UNESCO’s flagship initiative Revive the Spirit of Mosul, which was launched in 2018 and concerns the rehabilitation of the historical fabric of the Old city of Mosul, the revival of the city’s cultural life, and the strengthening of its educational system to ensure quality education for all.

The Joint Steering Committee of the project and international architectural competition for the Al-Nouri complex, required entrants to conserve the parts of the prayer hall that survived the 2017 destruction and integrate them into new buildings. It also called for the rehabilitation of historical edifices as part of the new landscaped site. By creating new spaces dedicated to the community – for education, social and cultural activities – the project will serve the inhabitants of Mosul in ways that go beyond its principal religious function. 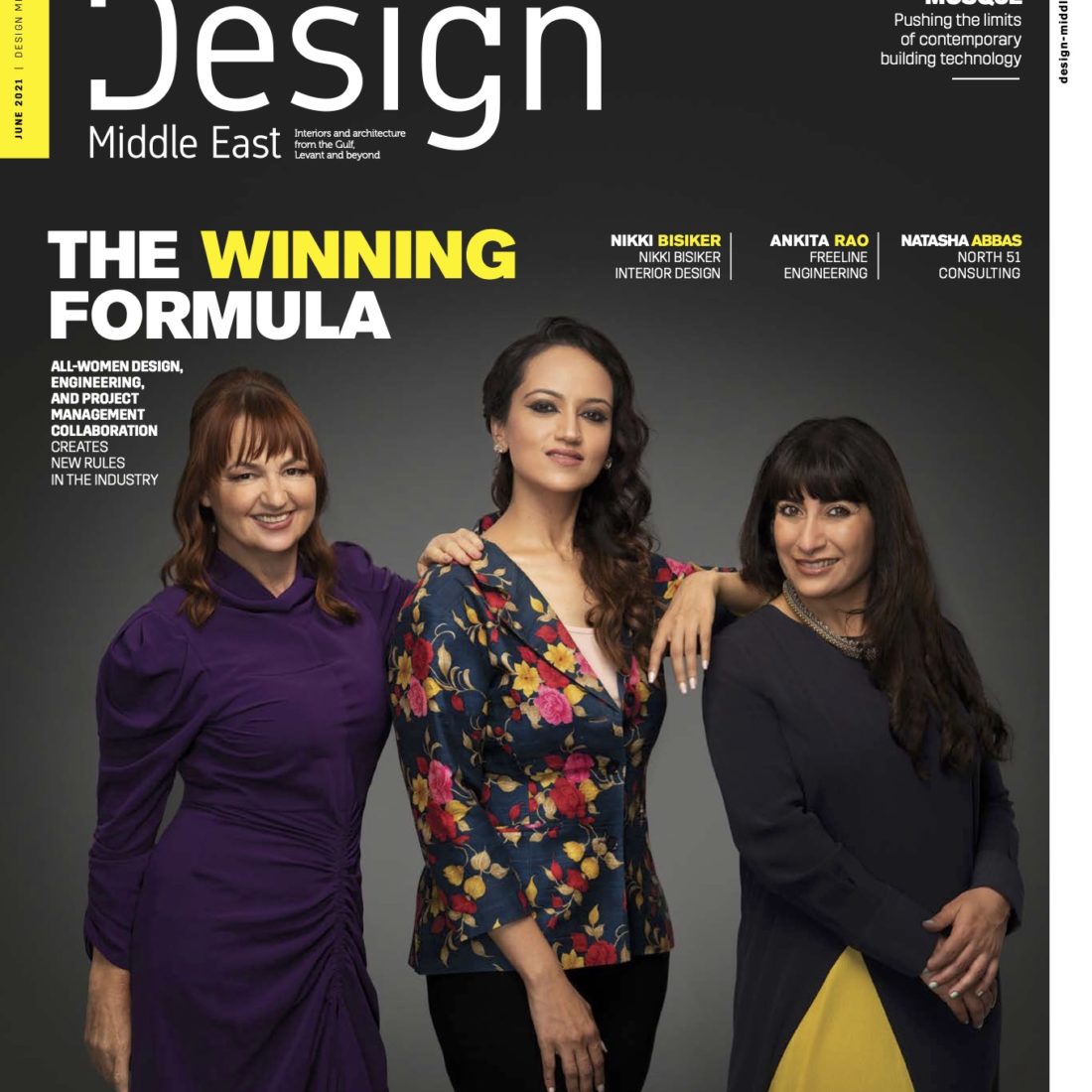