Olga Polizzi, acclaimed interior designer and director of design at Rocco Forte Hotels, talks us through the concept for Assila Hotel, the hospitality group’s new property in Jeddah 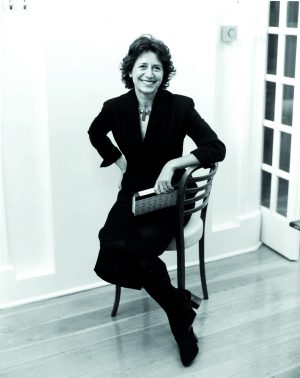 In the two decades since Olga Polizzi and her brother Sir Rocco Forte launched the Rocco Forte hotel group, the entrepreneurial siblings have opened 10 five-star properties across Europe. Their latest, Assila Hotel in Jeddah, Saudi Arabia, marks their first foray into the Middle East.

The two-tower property, designed by Jeddah based practice Mohamed Harasani Architects, occupies a corner of Tahlia Street in one of the coastal city’s most exclusive districts. Its distinctive curved design and reflective glass exterior have made it a landmark in its own right.

“I think it’s actually rather a beautiful hotel – it’s probably one of our nicest Rocco Forte hotels,” Polizzi says.

“It’s got some lovely heights and wonderful doorways and yet it feels of the place because that’s what we always try and do – so you wake up and you know you’re in Saudi Arabia. But it was quite difficult when we started.” 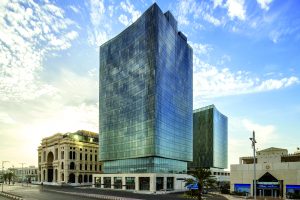 The guest rooms, no smaller than 44 square metres, feature limestone floors and bathrooms of mosaic and marble.

Polizzi teamed up with Martin Brudnizki Design Studio, the upscale practice based in London and New York specialising in hospitality. The Assila is the second collaborations between the pair, who previously worked on Rocco Forte’s Villa Kennedy hotel in Frankfurt, and their aim was to avoid the glitzy, over-decorated looks so popular in the region without going for anything too austere.

“We wanted to do something a little bit different but that something was still very comfortable and colourful and not too minimalist,” she says.

The flooring is of white limestone is in a matte rather than shiny finish, with high skirting in the same stone. Subtle Middle Eastern accents appear in the light fittings and in the vibrant soft furnishings such as scatter cushions, tapestries and bespoke handwoven rugs. These textiles add colourful, homely notes to the otherwise muted palette; they’re also a nod to Saudi Arabian handicrafts.

Loose covers have been used on the tables and chairs – “so it feels a bit Bedouin”, and brightly coloured cushions abound. Arabian-patterned carpets and handwoven rugs and tapestries celebrate the region’s rich history of craft. Polizzi adds: “The patterns are all from that part of the world, so it’s still got a feel of the place and yet it’s still very different from anything else in the region.”

A home from home
The colourful textures and patterns add warmth to the vast, airy spaces – Assila Hotel has full height doors and unusually high ceilings. “Actually the owners wanted them. We took out the floors to make the ceilings higher – they are very high,” she says. “Even in the bedrooms they reach up to three metres, and very tall doorways, so it looks quite palatial.”

While the guestrooms contain splashes of colour in the form of artworks and soft furnishings, the bathrooms are in cooler shades. The property has very traditional lanterns in all the lift lobbies, while more simple lanterns are placed beside each room.

Elsewhere, the lighting is quite modern: “You’ve got a bit of downlighting but we’ve tried to limit it because everybody does it – it’s such a bore for hotels – and then to try and change all the bulbs is a bit of a chore.” 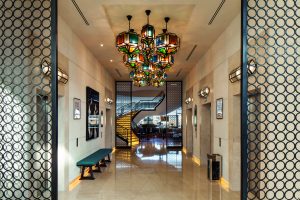 The Royal Suite is suitably regal. Spanning half a floor, it is an expansive space with separate living quarters for a maid, a formal reception area and a dining room, as well as private quarters for the three.

Bespoke hanging lanterns, silk wall coverings and crackled gold-inlaid plaster add a luxurious touch. The colour palette cannot be pinned down to any one concept; rather, the team took cues from the paintings and traditional textiles around them.

“I think we didn’t cut out any colours because a lot of yellows is very much that strong sun – I just thought so that it doesn’t all bleach out, you know, something quite strong. And the artwork is really good artwork.” Assila Hotel houses more than 2,000 pieces of original art by Saudi artists. Produced in a variety of media and numerous styles, they’re a wonderful tribute to the country’s burgeoning art scene. Each piece was chosen by Nora Al Issa, the daughter of the hotel’s owner and an established artist herself. A photographer who studied at London’s Goldsmiths College, Al Issa has exhibited her work in a number of countries and promotes the visual arts across Saudi Arabia in her role as an art consultant.

Polizzi says: “She’s very good artist – she’s shown in London and all over the world – and she has many artist friends from the region, so she really curated the whole thing. We’ve got a lot of original paintings from some quite well-known artists, and then a lot of prints of works by others for the bedrooms.

“I feel a sense of place is given by the art. You see art in Saudi and you immediately know that it’s not from London or Rome.”

The perfect partnership
Assila Hotel is Polizzi’s second collaboration with acclaimed interior designer Martin Brudnizki. Based in London with a sister studio in New York, his portfolio includes a number of trendy restaurants in London, Los Angeles and Miami. “He has very, very good ideas and it’s nice always to work with someone that you don’t have to tell them what to do, says Polizzi.

“You know, he has his own ideas and take on board anything we want.” The pair previously worked on Villa Kennedy in Frankfurt, one of Rocco Forte Hotels’ first properties. “Frankfurt, strangely, has actually lasted incredibly well, she reflects.

“The bathrooms are a bit unusual because they have a lot of glass walls – the back is painted – and that looks interesting; we’ve got some local artwork there as well. But Assila is totally different.” Brudnizki’s influence can be seen in the Jeddah property’s F&B offerings, notably Argentinean restaurant Pampas. With a distinctly Latin- American ambience, it offers a dramatic contrast to the rest of the hotel. 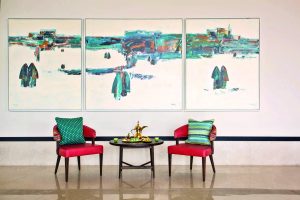 Partitions of dark wood feature stained-glass panels with a patchwork of coloured panes; adding both vibrancy and intimacy. It features an aged oak herringbone floor, oak wall panelling and a hammered brass bar front; the rodeo vibe is enhanced by the banquette of studded leather, beaten to give it the weathered appearance of a wellworn riding saddle. There’s even a painting of a bull in the lush lowlands that lend the venue its name. Polizzi adds: “We’re going to transfer a lot of prickly plants of all sorts in there to give it even more of an Argentinean feel.”

CONSTANT ACTIVITY
Polizzi is a busy woman. Rocco Forte Hotels is revamping some of its older properties, including Brown’s, in London, the Balmoral in Edinburgh and Brussels venue The Amigo. She’s been spending lots of time in Rome, working on Rocco Forte Hotel’s second venture in the city, Hotel De La Ville. “It’s a real mixture of old and new styles. And this time we’re going back more to the traditional,” she says. While further details have yet to be released, Polizzi and her siblings appear hard at work. “There’s always lots going on and hopefully there’ll be lots coming up.” 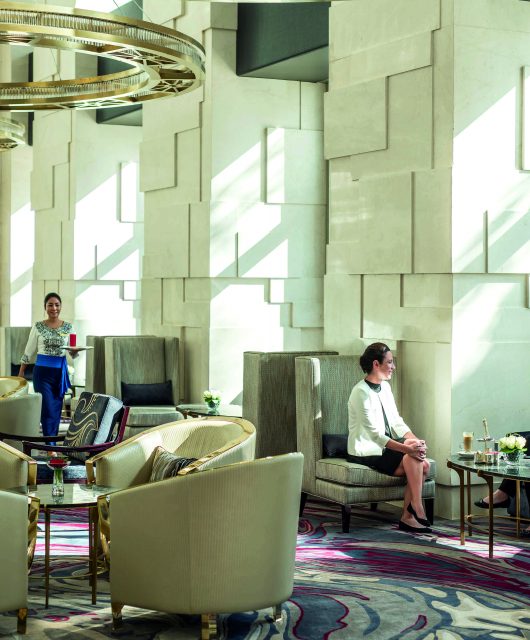 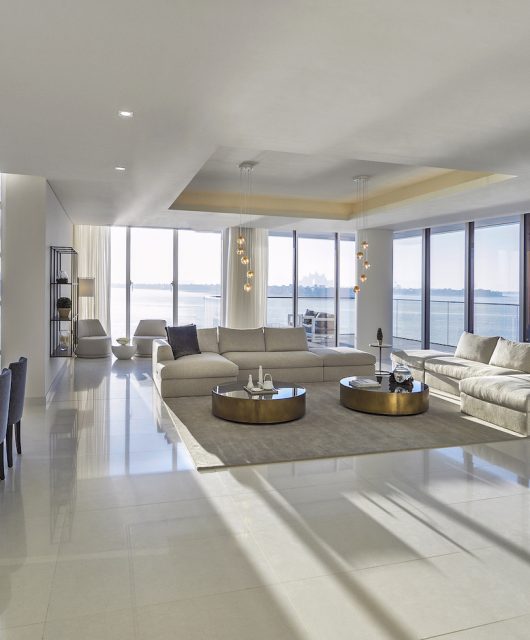 The Changing Facade of Interior Designing 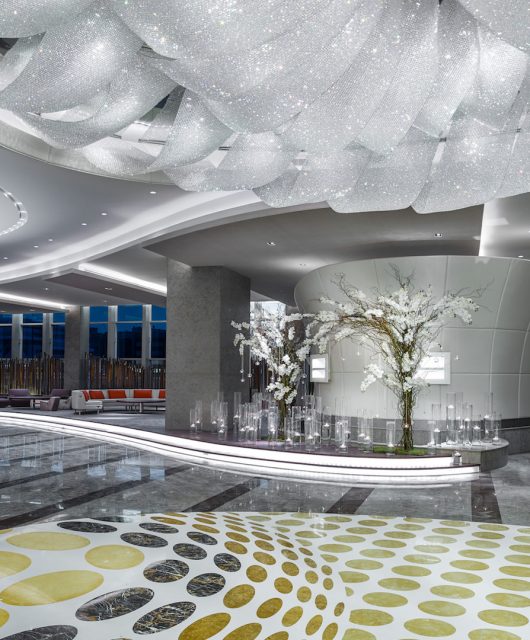