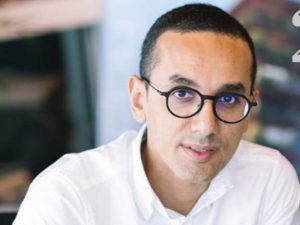 Mouaz Abouzaid is the founder and design principal of VERFORM, which is recognised throughout the Middle East for providing people-centric sustainable solutions.

Abouzaid has one overriding philosophy that underpins all his work is that the architecture and design have one simple function —to improve people’s interactions with the built environment.

The Cairo- born architect has been working for 17 years and has constantly championed the concept that individuals, regardless of background, need to truly feel at one with the spaces they occupy.

As a result, for Abouzaid, whose company VERFORM is based in Dubai, it’s not just about how people make architecture function, but also about how architecture can work for people.

He thinks that buildings are far more than the sum of their parts and ensures that each project incorporates a synthesis of design, function, and context, while also putting people at the centre of each design and assuring both beauty and meaning.

Growing up witnessing and studying the works of his graphic designer mother and architect father, Mouaz had a natural curiosity and passion for these crafts. He began his career by working for well- known worldwide firms.

Throughout, and while working with international partnerships, he developed a great eye for how to execute the architectural design, as well as experience in areas ranging from concept generation to engineering.

Branching out to achieve goals But he felt his true ambition lay elsewhere, and after fulfilling other people’s missions with architecture in their own firms and projects, Abouzaid decided it was time to start his own design and research studio
– VERFORM, a term that means “True-Form.”

His objective with VERFORM became to produce detailed studied projects about social, political, and health challenges in the Middle East by focusing on socioeconomic difficulties in a specific location and proposing smart design solutions to fix them in collaboration with like-minded friends and teams.

And, like many other ambitious startups, Abouzaid began by working from an unused study room in his own house.

His primary goal at the time was to conduct extensive research on urban or architectural issues and discern hypothetical solutions.

This theoretical approach, however, swiftly became a practical one – and it became about producing visual designs that offered concrete possibilities for change.

Shelter for Cairo’s low earners Sheltainer City was the name of an early project.

It entailed converting shipping containers into souks and houses for Cairo’s low-income citizens, giving them a roof over their heads and a place to call home.

These industrial containers, which were frequently discarded after use, provided a simple and practical answer to the lack of
one of the most fundamental human necessities – shelter.

Sheltainer focussed on those of the people who were most in need of the basic human right to a home.

Many people were living in the inhospitable environment of a cemetery, where the bodies of the living and the dead physically lay side by side.

Abouzaid quickly recognised the literally heroic efforts of men, women, and children to maintain their dignity and hope while living in such terrible conditions, as they faced the enormous challenge of retaining their humanity as individuals while projecting a sense of grace and compassion towards their fellow neighbours.

The main goals of Sheltainer were to remodel the area to enable healthy living spaces and open areas for recreation, to create a community with improved housing conditions, and to regenerate and enhance the neighbouring markets to establish a commercial hub.

Greening Dubai city centre The use of sustainable materials, as well as the underlying principle of utilising and reinterpreting existing urban spaces, was also at the forefront of project X-Area, a pavilion located in the heart of Dubai, creating a green space for relaxation and allowing a connection with nature, in one of the world’s fastest developing and stunning urban environments.

X Space is an open landscape among the skyscrapers and a green lung for the city, inspired by the movement of natural sands in the deserts of the UAE.

Natural vegetation covers the city’s main road, Sheikh Zayed Road, which runs beneath through a tunnel.

Community centre for rural settlement VERFORM has committed to developing a Community Hub for the Egyptian town of Arab Al-Sanae.

After being contacted via social media by a village resident seeking assistance in completing a development that some people had begun, Abouzaid saw there was a genuine need for architecture to improve the quality of local life.

Overall, he sees architecture and design as a tool to reflect back to society a way of living and looking at areas that people have not yet imagined and to unify cities and people beyond boundaries through it. 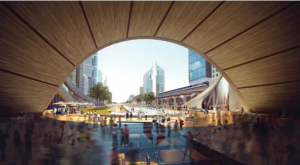 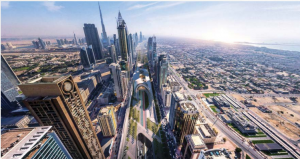 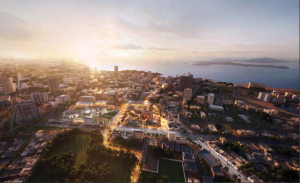