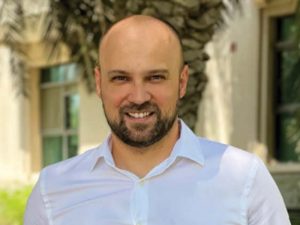 Born and raised in Bosnia and Herzegovina, Mirjan Mehmedinovic is an architect with over 10 years of worldwide experience in the Middle East and Europe.

After graduating from the University of Sarajevo’s Faculty of Architecture, he initiated his career at the university’s Institute for architecture, urbanism, and spatial planning.

At the Institute, Mehmedinovic led several highly-acclaimed residential and commercial architecture projects from initial planning and design to completion and delivery for over four years.

His most notable project was the University Library for which he received 2012 Annual Award for Artisticum for Best Architectural Realization from the Association of Architects in B&H Chapel of Vrhbosna’s Roman Catholic Archdiocese.

Seeing the tremendous infrastructure growth plans in the Middle East, Mehmedinovic made a strategic career decision to move to Qatar, where he joined CEG Doha as an architect.

At CEG, he was engaged primarily on residential, projects over the course of two years.

Mehmedinovic relocated to Abu Dhabi in 2014, to work as a design architect with Arabtec, where he worked on the most innovative, next-generation projects.

Among the largest projects, he worked on while at the company were the SZR Tower in Dubai, as well as the Al Reem Island master plan, and Al Badia master plan in the UAE.

After acquiring international experience and expertise, Mehmedinovic relocated to Dubai with colleagues in his network to launch Studio International Engineering Consultants (SIEC) in 2014.

As an in-house technology expert, Mehmedinovic has steered some of the company’s most mission-critical projects using leading-edge design and presentation tools including BIM and Lumion.

He also remains a passionate advocate of sustainability with a reputation for crafting structures that lie at the intersection of stunning design and environmental stewardship.

He is a licensed architect in Bosnia & Herzegovina and is currently a member of the Society of Engineers in the UAE.